Last night I travelled up to Buxton for the show opening and prize awards for the 2015 Buxton Spa Prize. It’s an open competition designed to celebrate the heritage/culture of Buxton and invites artists to paint a location from a ballot draw along with one other location of the artist’s choosing in the town. There’s also a unique sketchbook prize which invites artists to submit their sketchbooks, along with awards for children, young artists amongst others. What a great idea for a competition!

The prizes are very generous and this year both Ken Howard RA and Peter Brown NEAC were amongst the judges (both artists I hold in very high regard) so I opted to give it whirl. Not only that but I’ve not visited Buxton (or even the Peak District as far as I can recall) before so it was a good opportunity to explore the town and the surrounding area.

I was extremely chuffed to win second prize with this plein air painting done on the Broad Walk in Buxton (my allocated location). A real bonus to find it had sold almost as the doors opened too!

‘Evening stroll, Broad Walk – Buxton’ (9x23in, oil on board)
2nd Prize for the Buxton Spa Prize 2015 (click image to enlarge)
I was thrilled to win a prize and to have the judging panel give it the thumbs-up! When I came to get my board stamped in May I chose the spot where I thought it could work as a painting and decided what time of day the light would work best. Late evening seemed to offer the most potential with the opportunity for some long shadows.
My other entry was of the Artisan Market in the main shopping area known as Spring Gardens. I was quite fortunate to have both the market and the sun in town on the weekend I was there painting. It’s e a larger canvas by my own plein air standards (18x24in) so I did all I could in about 4 hours on location and then some final tidying up back in the studio. The two paintings were placed in my hand finished frames which seem to take forever to do! 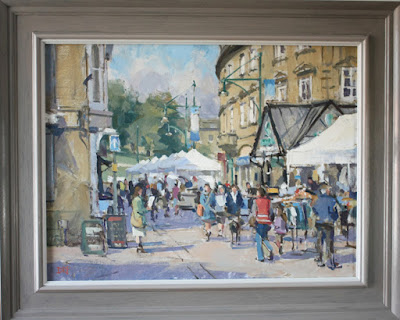 ‘Artisan Market, Spring Gardens (Buxton)’ (18x24in, oil on canvas)
I did a third plein air painting over the weekend whilst I was painting there in June but had to decide between that and the market so I opted to hang onto this one (below) of the Opera House and enter the market scene instead. 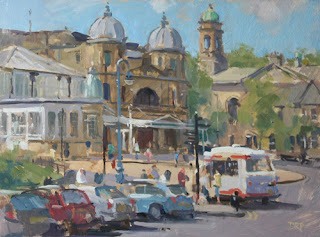 ‘Ice cream at the Opera House, Buxton’ (12x16in oil on board)
It was a great evening, meeting judges, organisers, fellow artists and gallery visitors. The standard of entries was very impressive across all categories and it’s a great exhibition to go and visit, lots of diversity and the sketchbooks on display add an interesting element to the show too. The overall first prize deservingly went to Rob Wilson and third prize for a super painting by Michael Ashcroft. 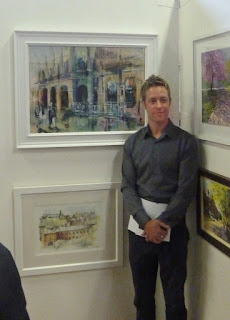 Rob Wilson (above) with his vibrant and sensitively worked entry done in mixed media, fully deserving of the first prize. 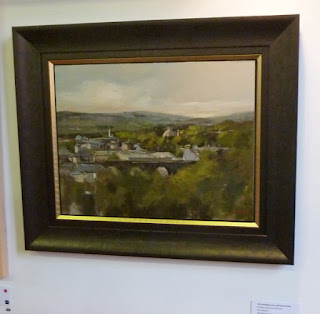 Michael Ashcroft’s lovely third prize oil painting (looked very good in that black/gold frame too). Julie Cross was the winner of the sketchbook prize with an impressive and very honest collection of work. 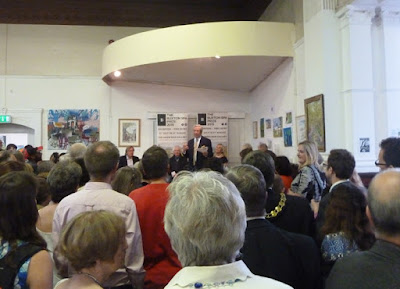 The awards ceremony above with Trevor Osborne (competition sponsor) on stage along with other members the judging panel which included Ken Howard RA, Peter Brown NEAC,Viscountess Cobham, David Mellor QC, Louise Potter and Ros Westwood. The gallery was packed out with guests/visitors and there was a lively buzz all evening.
Afterwards the prize winners were invited by Trevor Osborne to join the organisers, judges and sponsors for a very impressive dinner in the Old Hall Hotel (apparently it’s the oldest in Britain). It meant I had a late night journey back to Milton Keynes (arriving home at 1:30am) but it was certainly worth it.
The exhibition runs from July 17th – August 31st at the Green Man Gallery in Buxton. Do go and visit if you can.
David2017-12-24T11:56:41+00:00July 17th, 2015|6 Comments