Continuing the contra-jour theme, here’s one from the Campo Santa Maria Della Formosa that I managed to grab when the sun came back out on the afternoon of the penultimate day. I enjoyed this one and was glad I went with a larger board (12x16in) so that I could ‘go for it’ with broader marks. I was fired up by the fact that my previous painting had been wiped since the sun came out after half an hour into the session, changing all the tones and colours completely. Happy with the tonal range and colour harmonies on this one. 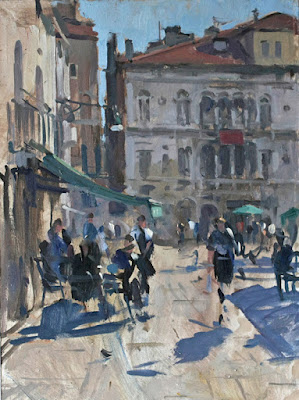 ‘Cafe culture,  Campo Santa Maria Della Formosa’ – oil, 12x16in
The one below is from a similar sort of position in the same square but the rain had arrived and transformed the subject into something quite different. For some reason I decided to work quite large at 12x16in but I think it was worth a gamble otherwise things can all get a bit fiddly. The pavement reflections now replaced the raking shadows but it was still an interesting subject and I was glad I had the umbrella. I debated as to whether to put the pharmacy sign in and decided it was worth including. Poor Tim left his back at camp and got rather more damp but he soldiered on with admirable plein air grit 🙂 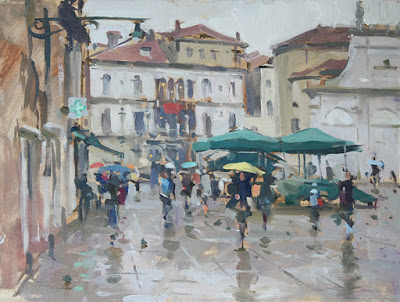 ‘Rain and reflections,  Campo Santa Maria Della Formosa’ – oil, 12x16in
Below is an early morning rainy study of the Piazetta San Marco and was an enjoyable subject with subtle tonal/colour variations. Luckily we were pitched up under the arches so the worst of the rain avoided us. Towards the end of the session the tides had risen and we had to escape before the water had a chance to soak our shoes. 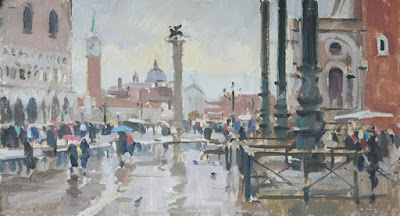 ‘Rainy morning, Piazetta San Marco’ – oil, 10x18in
Below is from the same square but I was positioned further forward towards the water and it was an incredibly awkward spot since the temporary walkway had been hastily put up right next to me and half of Venice seemed to be queuing up alongside. I eventually caved in and went for a hot chocolate. 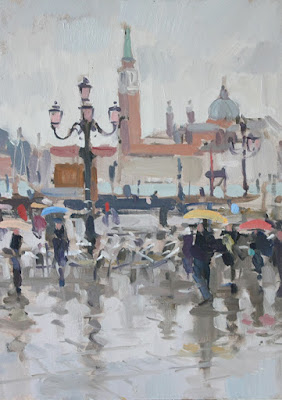 ‘Rain and reflections, Piazetta San Marco’ – oil, 10x14in
I got completely soaked painting the one below. It started raining after about 15 mins and then just got heavier until it turned into a monsoon! I figured since I’d got all my kit out and was wet anyway I may as well persevere. The others had more sensibly found places to pitch underneath the archways rather than looking across to them from an open spot!

‘Archway, fish market – Venice’ – oil, 8x16in
This little video snippet pretty much sums up the situation after 3 days of rain. Tim and I were not too enamoured with the deluge but our spirits raised when the sun appeared later in the afternoon
It was nice to end the last day with a final flourish from the sun and a quieter spot to paint from along the Arsenale. It’s much less crowded up at that end of the city and there are nice open views across the water with the sun setting behind. 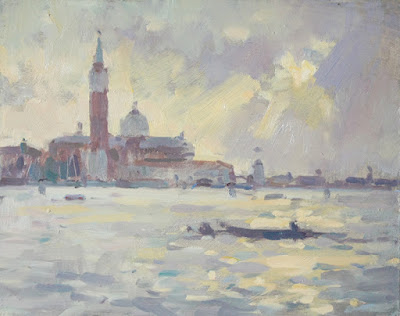 ‘Towards San Giorgio, evening light’ – oil, 8x10in
Finally, here’s one I rather enjoyed painting of Tim on a day when the rain was so heavy we found ourselves heading back to Ken’s place to escape it all. Tim was tinkering with a couple of studies and I decided to paint the studio setup with all the interesting furniture and equipment that adorns it. Ken’s red cap was even perched on the easel on the left for a nice little note of colour 🙂 It’s a fascinating subject to paint and no umbrella or crowd avoidance techniques were required! 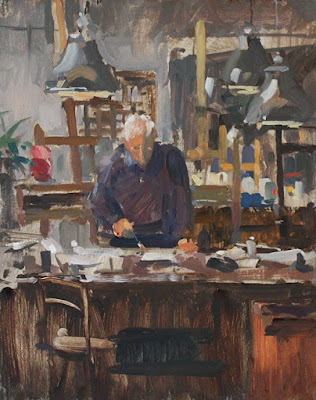