Here are the remaining paintings from the recent trip down to Cornwall. First up, a slightly larger piece (10x18in) from Sennen beach when there was an enticing mix of rain clouds and bursts of warm evening light. Within minutes of starting the sun disappeared so it was a case of half working from memory until the sun popped back again. It took me a while to find a spot where I thought the composition worked with the rocks and I wanted to try and emphasize the way those houses on the hilltop made a dramatic punch against the passing darker cloud. I was quite pleased with how it turned out given the conditions with the light at the time. 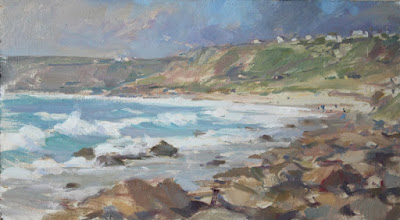 ‘Early evening, Sennen Cove’ – 10x18in, oil on board
This was a bigger piece (12x16in) attempted in the force 7 winds we enjoyed down by the jetty in Sennen. After a little surgery back in the studio it seemed to hold up and capture something of the energy from the moment. I really liked Tim’s and Mike’s paintings of this subject. 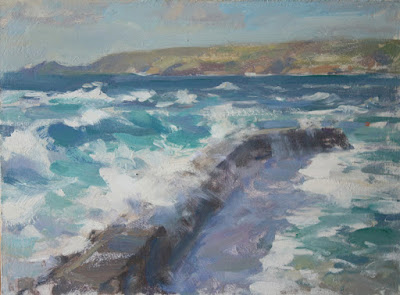 Force 7 waves, Sennen jetty – 12x16in, oil on board
Before returning home I happily spent a few days with family up near Padstow and enjoyed exploring new terrain along that stretch of the coast. I was perhaps a little ambitious attempting a 16x20in at Bedruthan given the speed at which the tide and light were shifting but I got the essentials down and tidied things up a bit afterwards. Those rocks can be tricky in oils (I was conscious of not making them too dark so they they end up drab/murky) and they are quite distinctive shapes too. 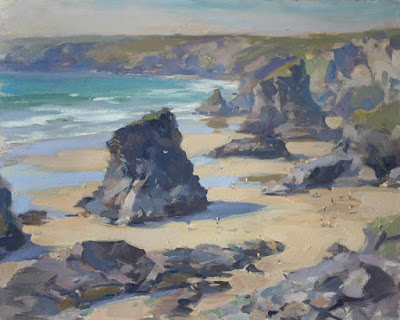 ‘Bedruthan Steps’ – 16x20in, oil on board
Port Isaac was a pleasant find and once I’d negotiated the Doc Martin crew (they were actually filming about 50 metres away) I found a spot standing rather precariously on some slimy seaweed down in the harbour. Luckily it was low tide and there were a couple of nicely placed boats to work with. 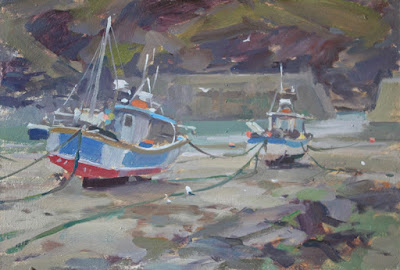 ‘Boats at rest, Port Isaac harbour’ – 10x14in, oil on board
My least productive day was when I ventured to Polperro. It was quite a long drive and we had that sort of ‘in a cloud’ sea mist/drizzle most of the day. Greeted with hoards of tourists I struggled to find a secluded spot and after a couple of wiped efforts settled on this arrangement, attempting to hone in on the subtle shifts in tones and colours. At least I could to head back to camp with something worth keeping anyway!

‘Boat study, Polperro harbour’ – 8x16in, oil on board
I had a very pleasant morning painting at Portcothan Bay and despite the sun not making much of an appearance there was a nice offering of subtle colours to work with. It’s a popular spot and the bustle of people brought lots of energy to the subject. I was standing on some elevated dunes to paint this (you can see the fringes of grass in the foreground). 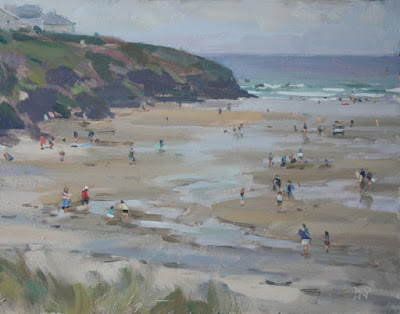 Another one from Portcothan Bay, this time pitched up against the headland in the painting above and looking across to the other side of the bay. I liked the shape of the rock and the surfers were very obliging in bringing a bit of interest to the subject. I made use of the reflection of the headland in the wet sand in the foreground too. I quite like the simplicity and directness of this piece and I’m tempted to leave those grains of sand in the foreground too!