It’s always a challenge to try and paint those dramatic zawns from a lofty perch on a cliff edge and this was no exception. I was safely within range of the footpath but the high wind meant I couldn’t even use the tripod sitting down so I had the paint box wedged in my lap. Even then it was a bit of a struggle and I was pleasantly surprised the final result wasn’t full of wayward marks. Needed to pitch the tones of the water and rocks as accurately as I could in order to make it work and avoid ending up with drab/muddy rocks. I’d been hunting for a spot to paint for about an hour and had almost given up the hunt before settling on this spot. Almost threw it in the sea at one point, convinced it was a wiper but looking at it now it seems to hold together. 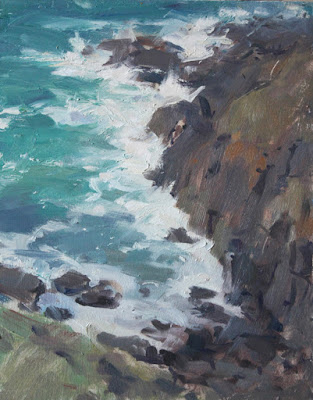 ‘Pendeen Zawn’, 8x10in, oil on board
Some respite from the elements was found over in Mousehole but in actual fact the painting was in some ways more challenging with a mass of detail, tourists and the ever present danger of a descent into something twee to negotiate. I chose to tackle the cottages at the far end on the wharf as I was drawn to the range of tones in the flat light. 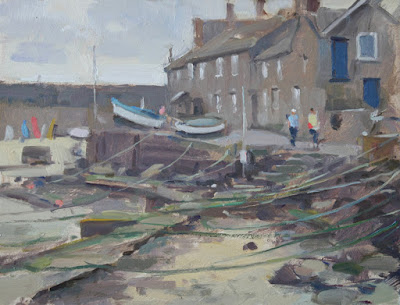 ‘Cottages from the wharf, Mousehole’ – 10x13in, oil on board
The second effort (after a re-fuel with much needed tea & cake) was done from where those surf boards are resting in the background in the first effort. It was quite difficult judging the tones as the shifts were very subtle in places. 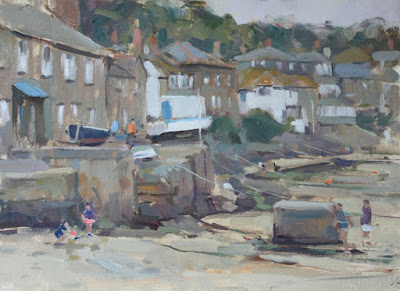 ‘Towards the wharf, Mousehole beach’ – 12x16in, oil on board
Tim and I weren’t sure what the weather was going to do and whether it would hold at Pendeen so we squeezed in a small boat study, thinking it would be a simpler and more relaxed way to round off the afternoon. Anything but in fact! The light was in and out, tide rushing in, awkward angle to draw on the boats and we suddenly found ourselves surrounded by a beach birthday party of about twenty or so 4 year olds with a heady blend of frenzied excitement and explosive tantrums in the air. Mayhem! 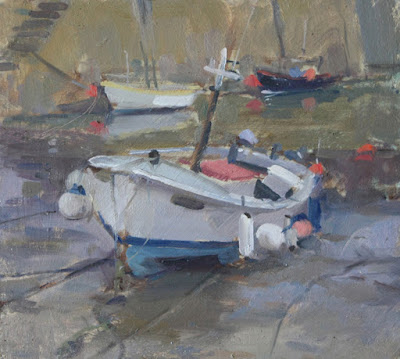 ‘Boat study, Mousehole’ – 9x10in, oil on board
Carrying on the boat theme, I found a more unusual angle looking down the slipway near the lifeboat house at Sennen. After an initial wiper I shifted a few of the elements around to try and make a tidier composition and allow the viewpoint to make some sort of visual sense.

‘Looking down the slipway, Sennen – 8x16in, oil on board
A later afternoon visit to Penberth allowed me to paint in relative shelter after being windswept on Porthcurno beach. Just enough energy left to do a small 8×10 of a fishing boat on the slipway. The background is actually bit darker in the painting than the photo suggests. 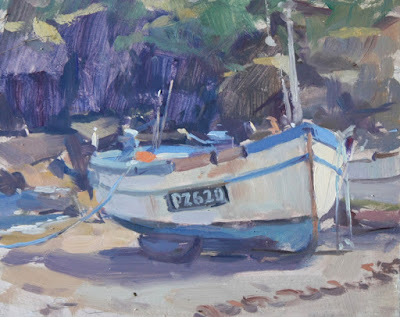