On a particularly murky morning we all headed up the coast road to nearby Morston which never fails to offer up subject matter. I’ve never really had a go in overcast conditions so it was interesting to take on the mud and all the greys reflected from the foggy sky. 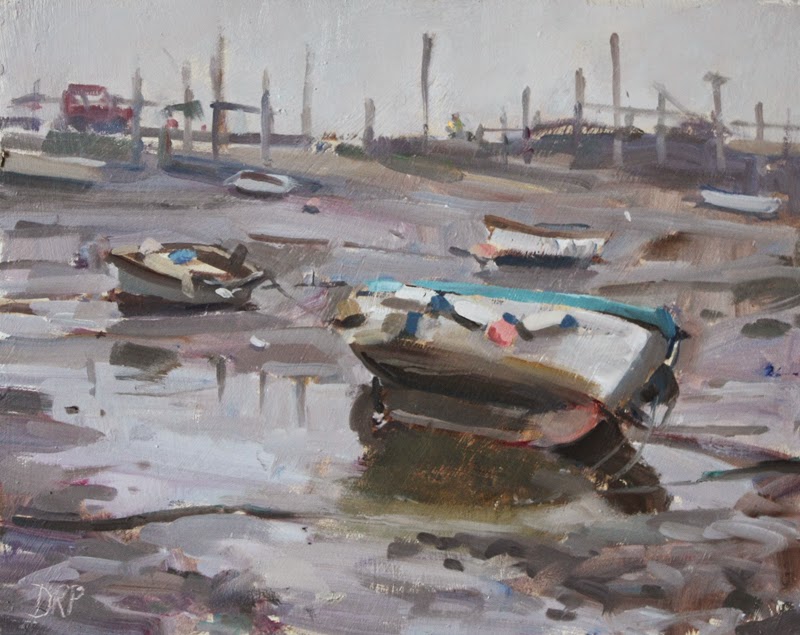 ‘Boats at rest, Morston’ – 11x14in, oil on board
It’s surprising the colours you find in these sorts of conditions and I wanted to make the most of the tonal range that was on offer. I drafted in some distant boats, taken from elsewhere, to aid the sense of depth. Note the hints of a Land Rover and someone on a moped on the distant bank, quietly suggested so as not to draw too much attention. The one below shows the same boats but I was perched up on the jetty behind, looking towards Blakeney church in the far distance. I felt in the mood for a bigger board but it was very cold and breezy and towards the end I started to feel a bit of a nip. 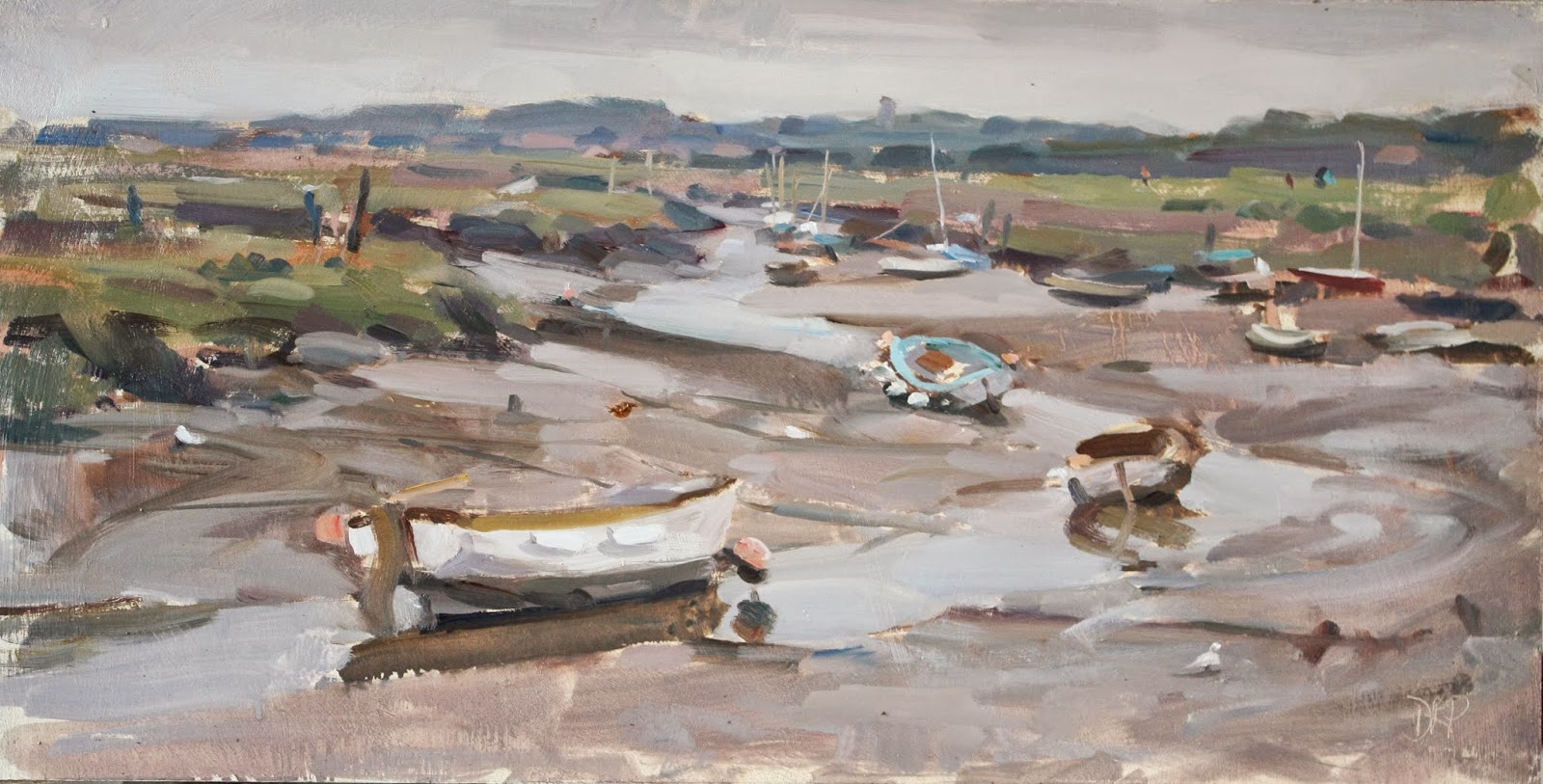 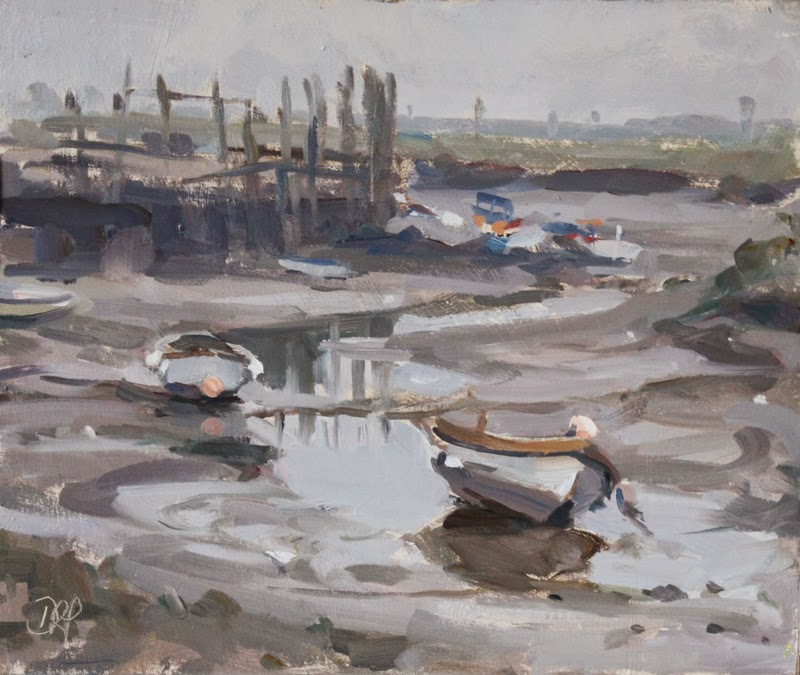 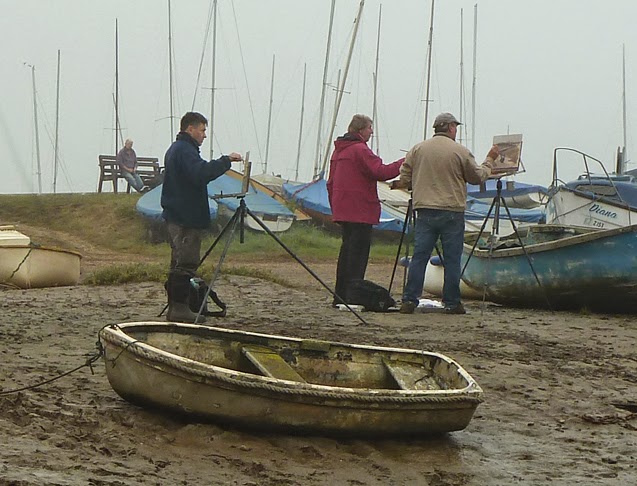 Roy, David and Karl lined up for action
There was a great little boat moored up on the bank at Brancaster Staithe and I think it has real personality, if a boat can have such a thing! I’ve painted this boat in the water at sunset on a previous trip but it was a different sort of challenge this time. 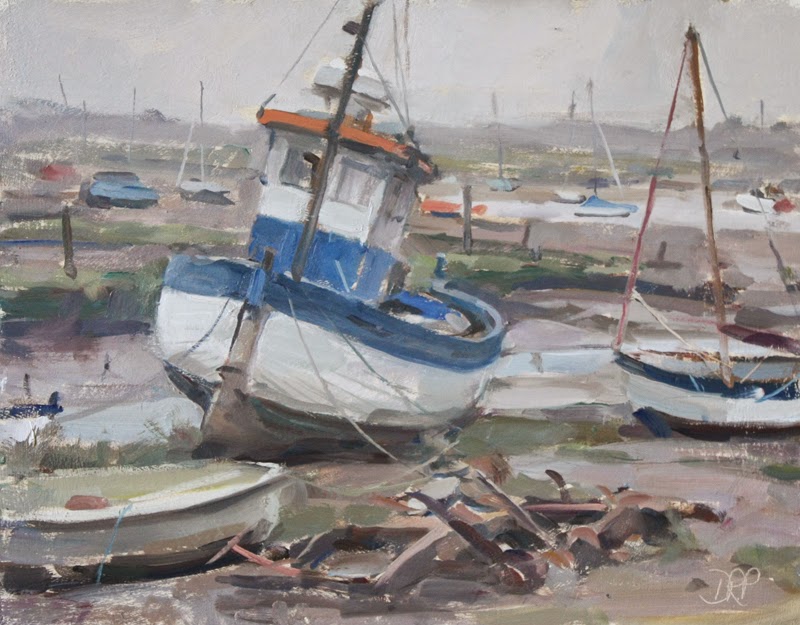 ‘Boats and buildings, Brancaster Staithe’ – 8x16in, oil on board
On the final day we actually had some decent sunshine! Tim and I decided that a view from the house was too good to resist and since the wind was really whipping if made good sense. We had the window open to make it feel more like a plein air outing! 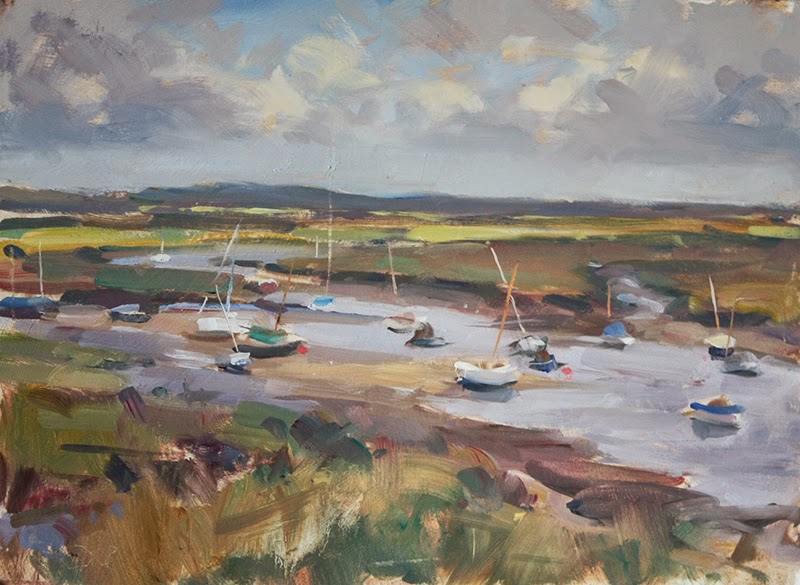 ‘Blowy day, Burham Overy Staithe’ – 12x16in, oil on board
After the first attempt I decided to have another go and loosen up a little on a slightly bigger board. At one point we had a squally shower and we couldn’t see a thing through the window but the rain drops soon got blown away. I might be tempted to use these as reference for a bigger piece in the studio at some point as the window was huge and I like the idea of re-creating that sense of a giant vista! 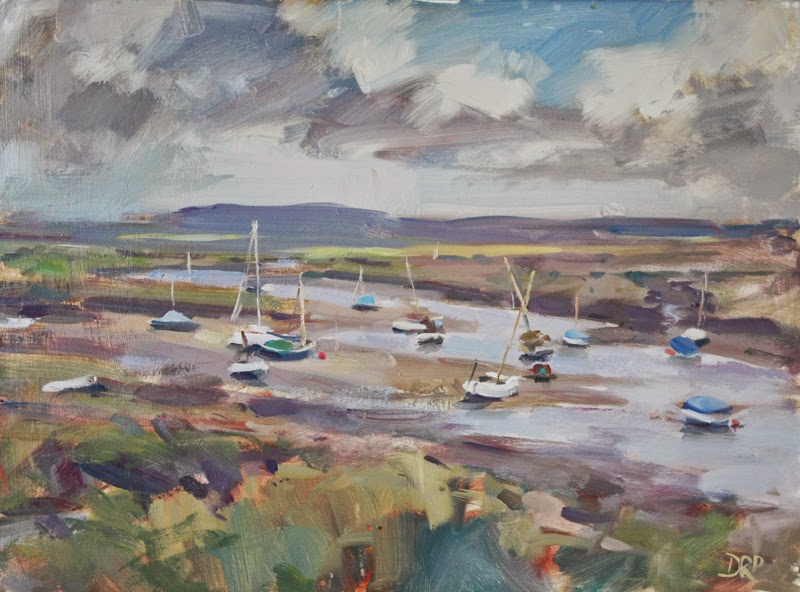 ‘Bright and breezy, Burham Overy Staithe’ – 14x18in, oil on board 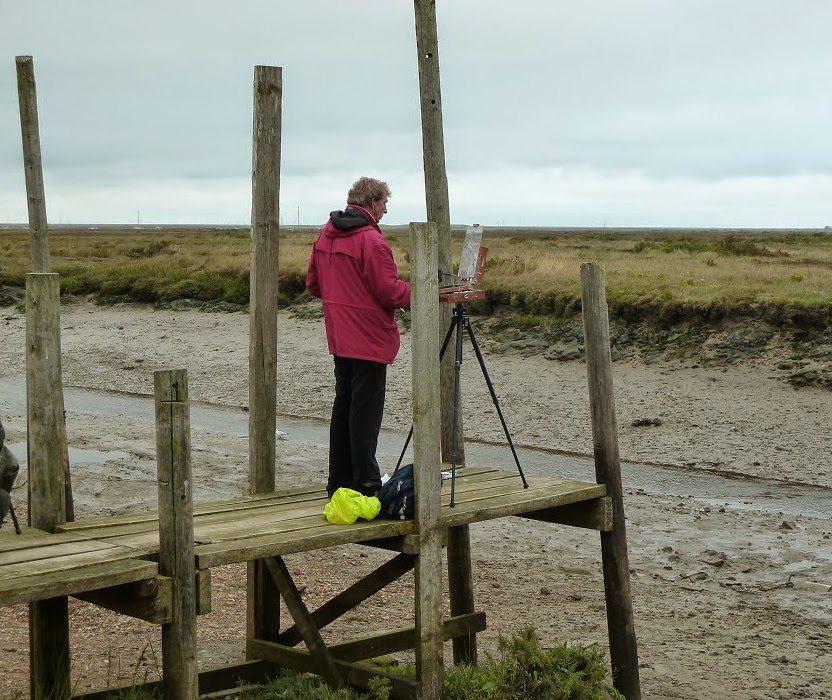 David Bachmann painting from a chilly perch at Morston 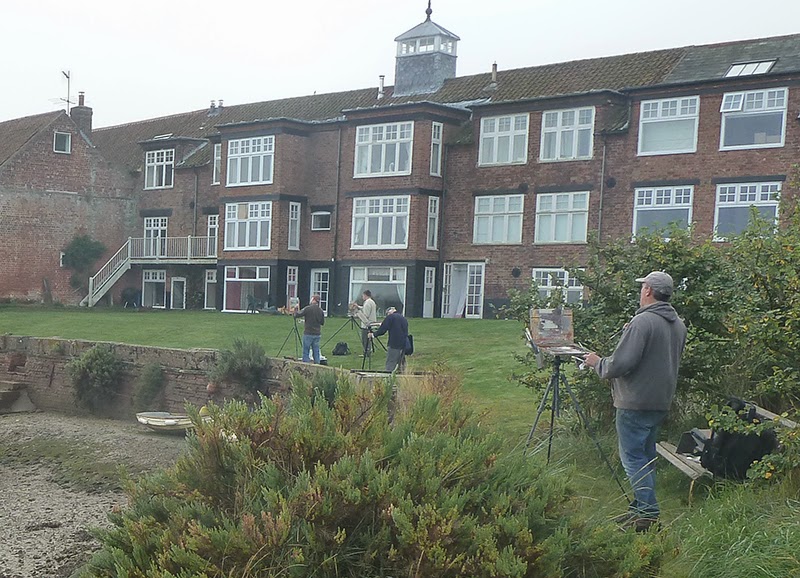 Karl, Tim, Roy and Tony painting from the back of the house 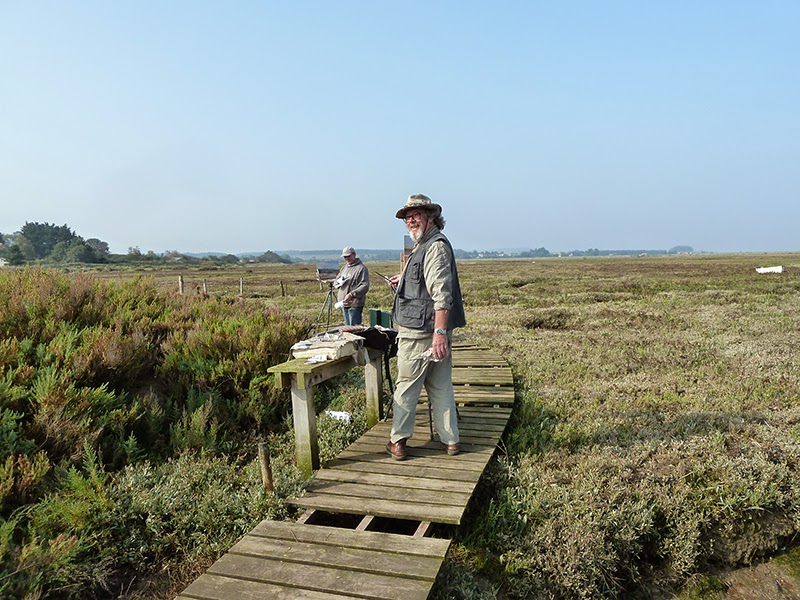 Careful when you take a step back Mike! 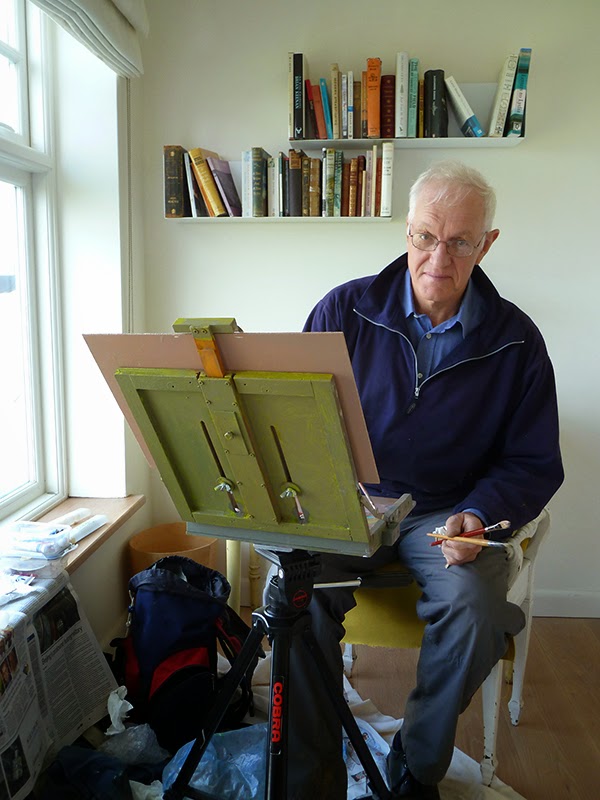