I’ve just returned from a lovely painting trip to North Norfolk with some friends last week. Excited by the prospect of a few days of uninterrupted painting I dived straight in (not literally…the mud wasn’t that inviting) after arriving at Brancaster Staithe. 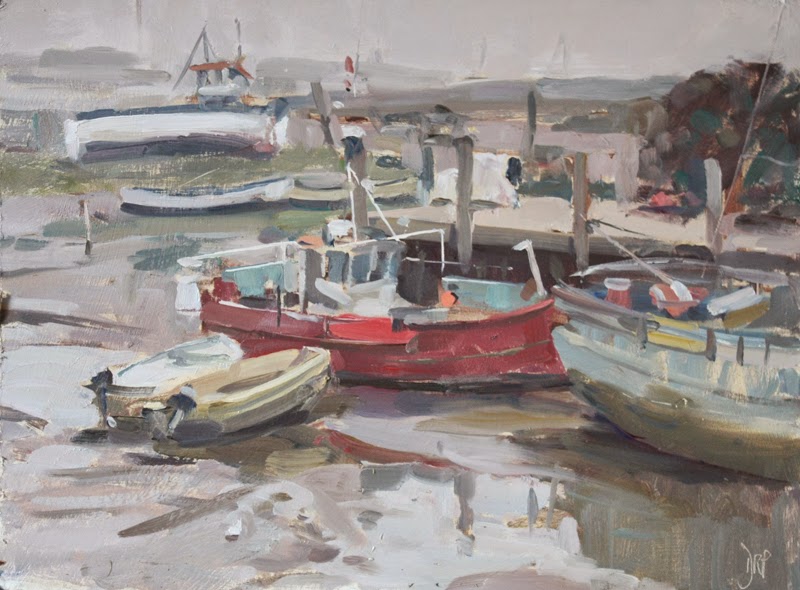 ‘Boats with mud and fog, Brancaster Staithe’, 12x16in oil on board (click images to enlarge) 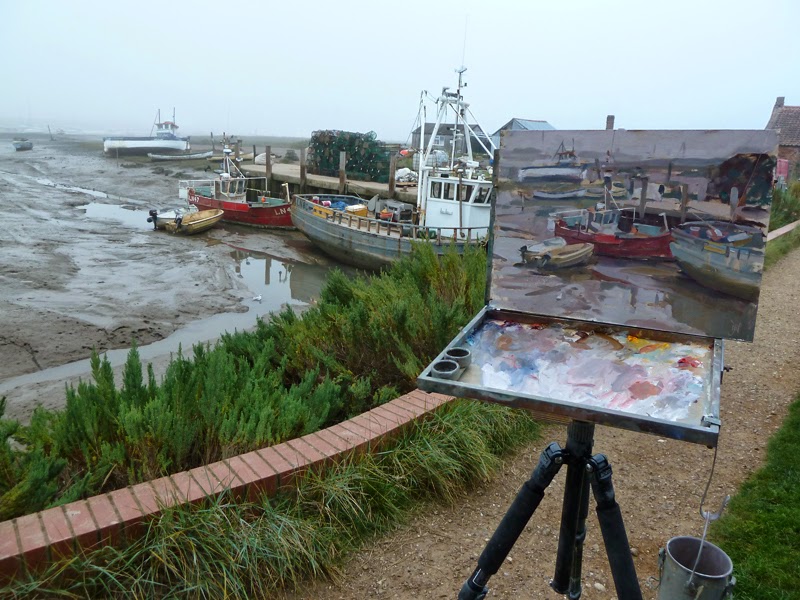 I was surprised how long the tide remained low for this one.

We stayed in a fantastic location at Burnham Overy Staithe and had stunning views literally on our doorstep. It’s not hard to see why the likes of Seago got so inspired by Norfolk. 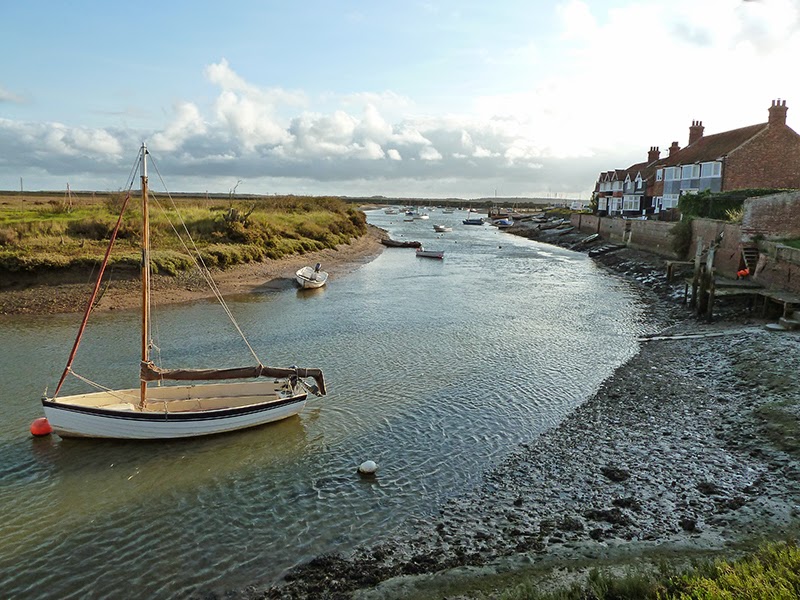 The view from the back garden!
The group included David Bachmann, Roy Connelly, Tony Dakin, Marc Delassio, Jory Glazener, Tim King, Mike Richardson and Karl Terry. We also met up a few times with John Dobbs and his eight month old Alsation Dixie (I couldn’t find a web link for Dixie!)
The photo above doesn’t reflect the majority of foggy/murky weather we had but luckily the sun did come out on a couple of mornings. Mind you, we quite enjoyed painting in the grey conditions and it helped emphasize the local colours of subjects. The next morning we started up on the harbour at Burnham Overy Staithe which always offers up interesting arrangements with the boats and buildings. 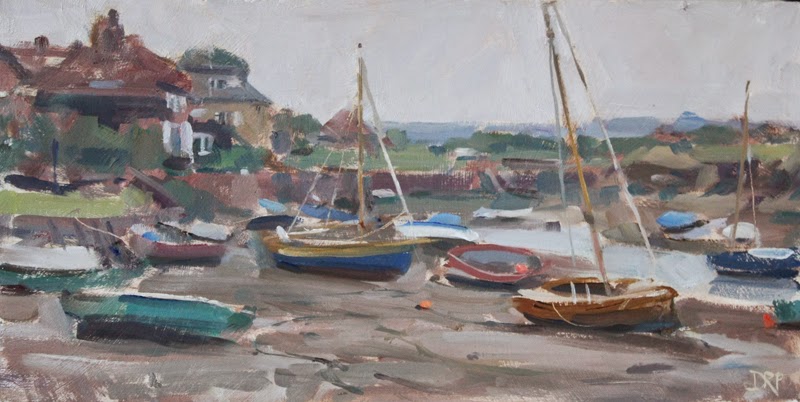 ‘Grey morning, Burham Overy Staithe’ – 8x16in, oil on board
I had work quickly on the study below just at the back of our house at Burnham Overy Staithe. The tide was rising, the sun kept coming in and out and the boat on the right was spinning round like crazy! Subtle colour/value shifts to contend with and the boats end up being quite tiny (yet critical) marks on a smaller scale. I tend to stick to small panels when the subject is likely to change quickly. 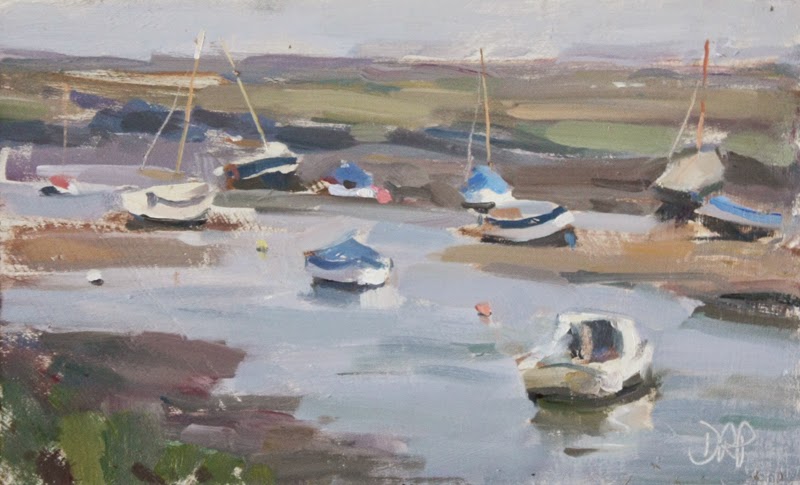 ‘Rising tide, Burham Overy Staithe’  – 6x10in, oil on board
Below is another small panel of the harbour at Burnham Overy Staithe. I do like the way the buildings and masts provide an interesting mass on the left and I was able to balance this with the jetty and the boat with a maroon sail which was heading out for a final run of the day. The light was really fading so I keyed this a bit higher and by the end I couldn’t see much through my specs as the drizzle had rolled in! I tried to keep the values and colours crisp to avoid the dreaded ‘veil of drabness’.

‘Last sail of the day, Burnham Ovey Staithe’ – 6x14in, oil on board
There was quite a lot of drawing in the one below, along with close values and colour shifts which needed some close attention. I was keen to suggest rather than describe anything too heavily, aiming for an overall harmony of some sort. 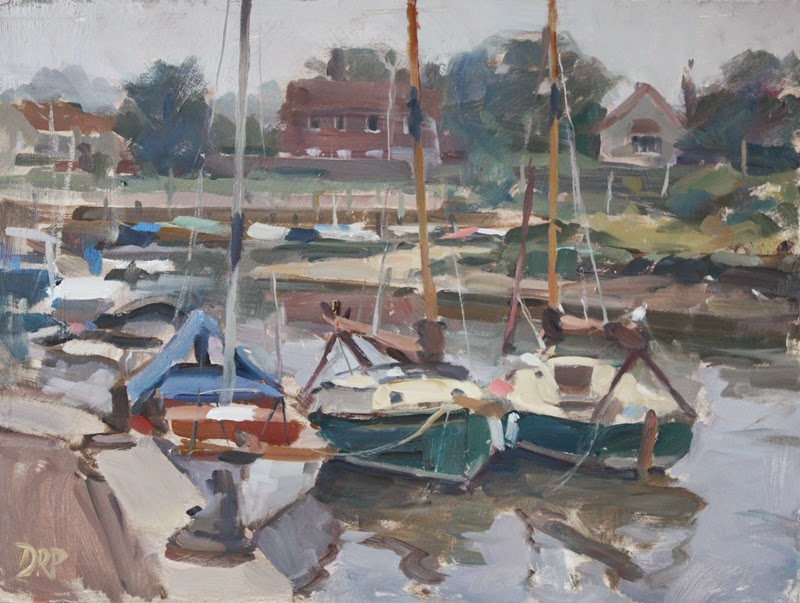 ‘Boats moored at Blakeney’ -12x16in, oil on board
I enjoyed painting something a little different with the jumble of fishing gear and the marsh water in the background. Again, it was very overcast so I decided to bring the emphasis closer in and get a fell for all the clobber that gets strewn around the boat yard at Brancaster Staithe. 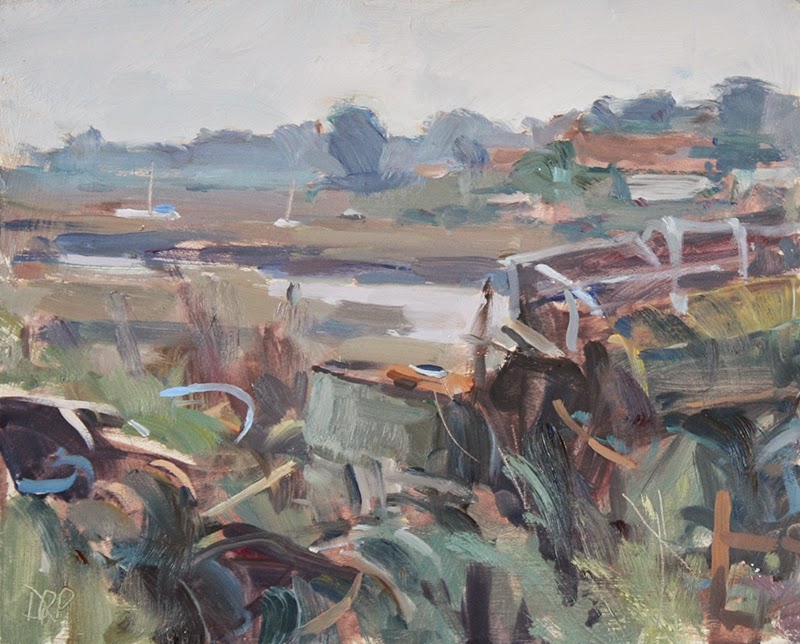 ‘Fishing jumble and marsh, Brancaster Staithe’ – 8x10in, oil on board
The painting below was nice to do, not least because the sun came out. As is often the case, a few boats were moved around to make a better composition and the muddy bank on the right hand side seemed to balance up the diagonal line of the three main boats quite well. Even on this medium sort of scale the boats can be tricky to paint and a wayward mark can ruin the effect. I try to simplify the shapes and observe the essential elements without getting snagged on unnecessary details. 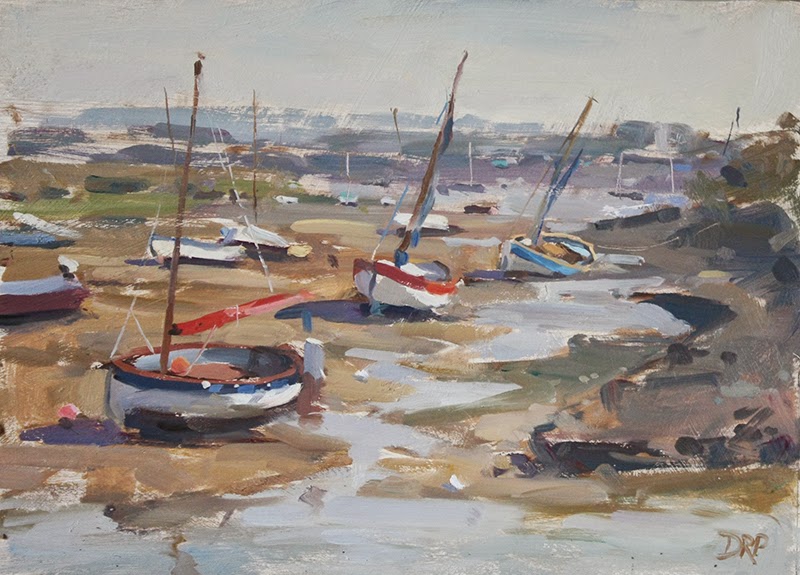