Just returned from a great few days painting with friends in the beautiful city of Seville. Amongst the painting crew and providing some fine company were Tim King, Mike Richardson, Tony Dakin , Eric Davis and our fantastic host David Bachmann. David lives with his family in the heart of Seville and both he and his wife Herme are talented artists.

It makes such a difference when there’s plenty of sunshine on tap, that’s for sure! Mind you, even on the couple of cloudy days we had at the start there were painting subjects to be found. The sun can be quite fierce (mid to high 80’s) so we were always looking for shady spots to paint under. Tim was the only one of us who had a decent umbrella shade, constructed in a self confessed ‘Heath Robinson’ manner (often they’re the best!). Admittedly I’m yet to crack the tripod/umbrella conundrum.

David kindly provided us with special passes to the Royal Palace of Alcazar which became one of my favourite painting spots throughout the week. With fabulous architecture and stunning gardens it’s a visual feast. I loved the detailing in the ceramic tiles and urns. There were lots of tourists but we soon discovered a knack for finding quieter/shady spots. Towards the end of the day it became ever more peaceful and I have fond memories of painting the urns from the cool shade and listening to the birds with water trickling from the elaborate fountains. Bliss!

(You can enlarge the images below by clicking on them).

There was so much drawing in the painting below but I wanted to have a crack at it as the wedge shaped building was so imposing and the perspective was quite a challenge. I decided to crop off the dome at the top as I preferred the composition without too much sky and didn’t want to paint too small and fiddly. Once again, we lucky to find a shady spot. On the left is the side of the gothic cathedral. The raking shadows across the foreground only lasted a few minutes at the start. 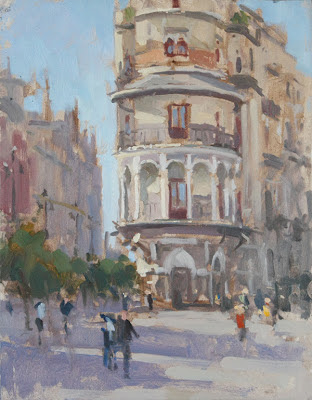 ‘Mid morning from Plaza Nueava, Seville’, 11x14in, oil on board 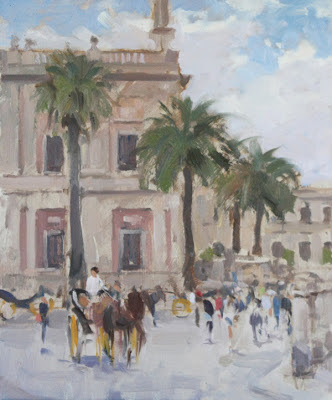 ‘Palms, Cathedral Square, Seville’ (oil on board, 10x13in)
Tim and I spotted these palms on our first scout of the cathedral square and vowed to paint them at some point. With the added bonus of the horse carriages passing by regularly we could use them to our advantage and I enjoyed trying to suggest their essence without fussing over detail. Since they move past quite quickly it made sense not to make them too well defined to give a sense of movement. 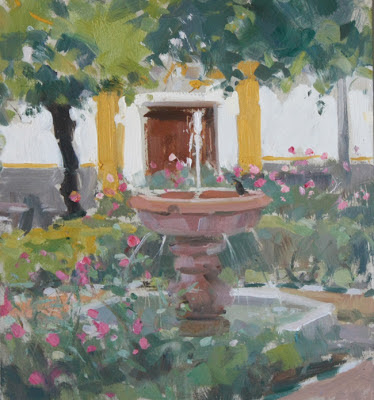 ‘Blackbird bathing – Place Elvira, Seville’ 9x10in, oil on board
I liked the way the yellow punched against the dark tree trunk. A little blackbird landed on the fountain for a quick bath towards the end. Very peaceful with the trickling water too! 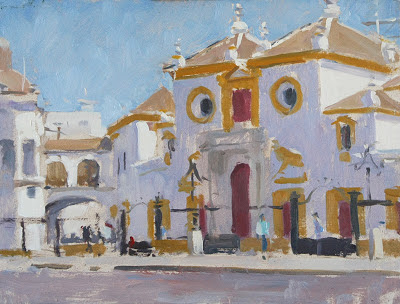 ‘Plaza de Toros de la Maestranza, Seville’, 11x14in, oil on board
This is the bull ring and the light/colours were nice and vibrant. David and I pitched in a spot shown in the photo below and highlights some of the issues involved in selecting a spot to paint from. The main issues here were finding somewhere shady where buses wouldn’t park in front of us (in this case solved by being in front of a pedestrian crossing). 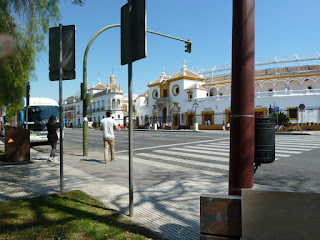 Our pitch across the road from the Bull Ring. ‘Carriage Station, Seville’ (10x13in, oil on board)
The sun kept popping in and out on this painting of a carriage station but I was keen to try and make something of the horse carriages which, of course, kept moving! 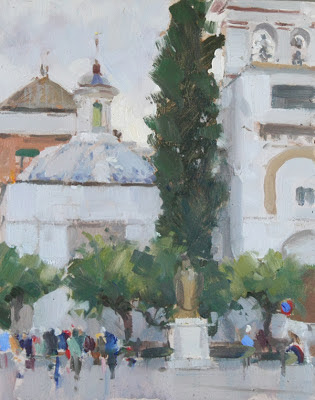 ‘Cypress tree, Cathedral Square, Seville’ (oil on board, 8x10in)
The painting above was done in cloudy conditions and it was quite a challenge to make the tones of the white buildings work against the grey(ish) sky. As with much of the subject matter in Seville there was plenty of drawing and subtle shifts in tone and temperature which seem to change quite rapidly. 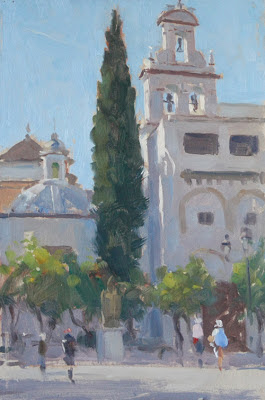 ‘Cypress and bell tower, Cathedral Square, Seville’ (oil on board, 8x12in)
This is almost the same view painted on a hot day and it wasn’t until the end of the session that I realised that the slight warm cast on the shadow side of the building on the right was being created by reflected light from the sun hitting the façade of the adjacent cathedral. One thing I learnt quickly was that you couldn’t just rely on general rules (e.g. warm light=cool shadows). I found I needed to look at everything really closely because sometimes the reflected light was so strong it seemed to defy belief. As one of my favourite artists Ken Howard has said, ‘paint what you see, not what you know‘. 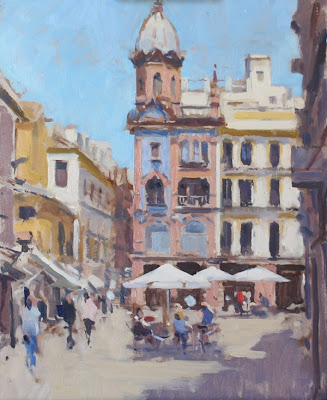 ‘Sunny square with parasols, Seville’ (10x14in, oil on board)
This was painted around lunchtime and the sun was pretty strong. I really enjoyed this one. The parasols were initially in shadow from the buildings on the right but as the sun moved they became lit and made a nice contrast against the dark windows behind. The building behind with blue tiles was a beauty and there was a lot of drawing (with paint). I really do like that deep yellow you see throughout Seville. Pitching the tone and temperature of it in the shadows is quite tricky and I was mindful of not overstating the yellow too much, otherwise it can dominate. As ever, people offer a few notes of colour interest and the shadowed building on the right helped to accentuate the lights and frame the composition. 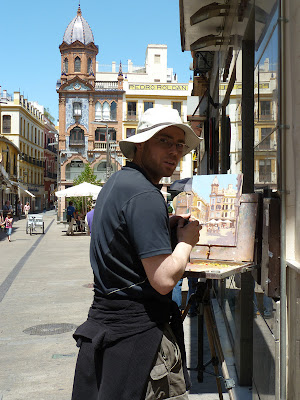 I have my serious painting face on (and trusty painting hat) but I was enjoying it! 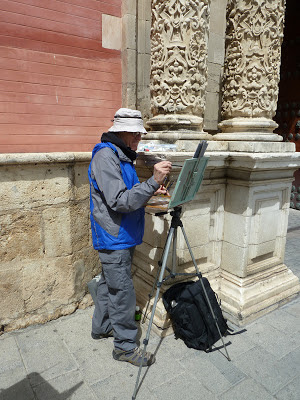 Tim gets stuck into another winner, no shade this time round though! 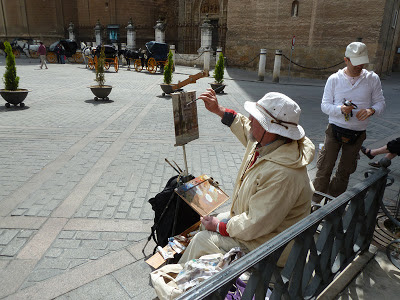 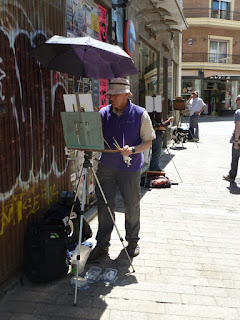 Tim in action with his ingenious parasol/umbrella set up, with Eric and David pitched futher back. 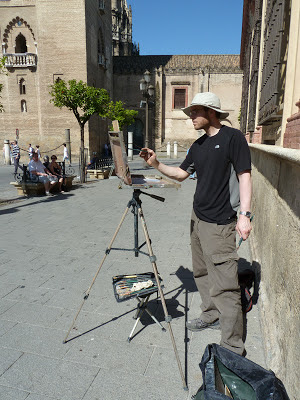