We spent a fair amount of time in the grounds of the Royal Palace of Alcazar and despite it being busy with tourists it still felt like an oasis/sanctuary. The Moorish influences are quite evident in the architecture and there are some really impressive plants including palm trees. 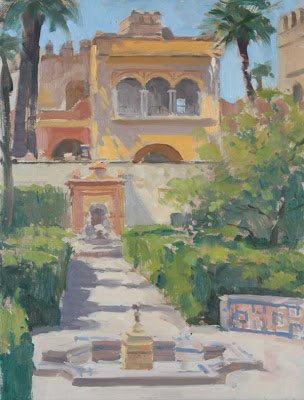 ‘Royal Palace of Alcazar’, (12x16in, oil on board)
I really wanted to try a 12x16in of this subject as it allowed for plenty of breathing space with the foliage and foreground fountain. David had painted from the same spot earlier in the week and done a cracking job and I was keen to have a go, albeit with a slightly different light. I really enjoyed it and was conscious of not messing about too much with the colours on the building, especially the shadow colours/tones. The notes of interest/colour from the ceramic work add an extra touch to the subject. It was nice when Tim came to have a look and said I’d captured the sense of heat/light and we departed contentedly for coffee and cake 🙂 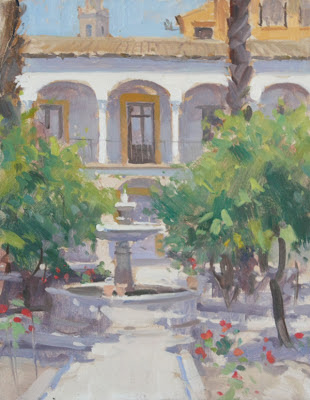 ‘Royal tennis court, Alcazar’ (10x13in, oil on board)
I found a shady spot under the arches of the royal tennis court which was the first tennis court ever built in Spain. Today, you wouldn’t know it had been a tennis court but I liked the dappled light, arches and the glimpse of the Giralda behind. It was quite symmetrical so I tried to position things slightly off centre whilst attempting to keep everything balanced. The two palms were positioned either side of the fountain but I shifted them slightly to avoid a ‘prison bar’ effect! I also played down the red flowers as they would have been too dominant. The notes of red complimented the green foliage quite nicely. 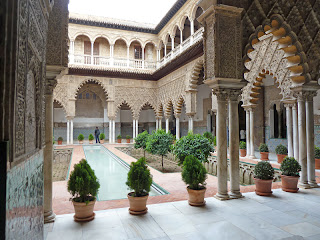 One of the many elaborate courtyards. Our pass allowed us to paint in the gardens but it was nice to wander round the palace every now and again. 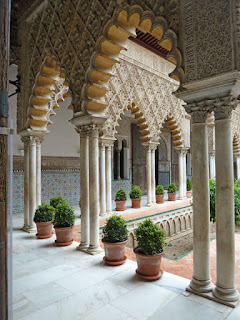 I’m actually quite relieved we didn’t have to take on some of those complex arches! 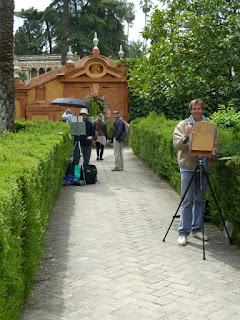 David Bachmann and Tim King enjoying their painting in the grounds. 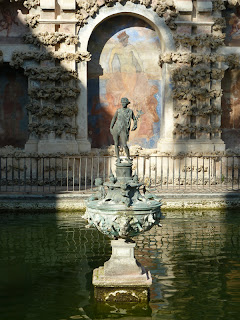 The statue of Mercury is a lovely feature and was painted by Sorolla. It was VERY busy around the water tank and I managed one early morning study before the masses arrived. I would’ve liked to have painted it in the evening light (as per the photo above) but that’ll have to wait for another trip. 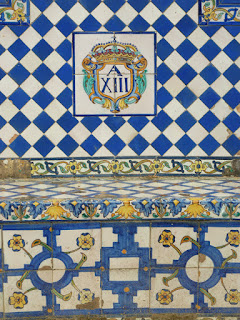 There were amazing ceramic tiles throughout the palace grounds. This is one of the benches! 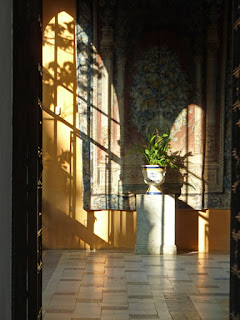 Another lovely urn in the early morning sunlight. If it wasn’t for being one of the busiest spots in the palace I would have stayed to paint this. 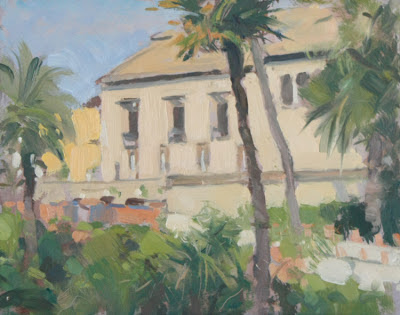 ‘View from raised walkway, Royal Palace of Alcazar’ (8x10in, oil on board)
The piece above was painted from a narrow, covered walkway which gets extremely busy with tourists. I managed to get something down before it got too crowded. I moved the palms a bit to improve the composition. There was a water organ below where I was standing and it kept repeating the same tune which I couldn’t get out of my head for hours! 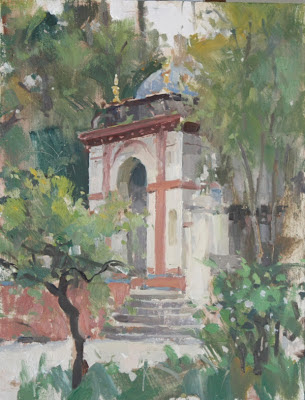 ‘Cenador Del Leon, Royal Palace of Alcazar’ (10x13in, oil on board)
I liked the way this pavilion nestled amongst the foliage from this angle. The cloudy conditions allowed me to focus on the subtle range of greens and the earthy red on the building contrasted quite nicely against this. 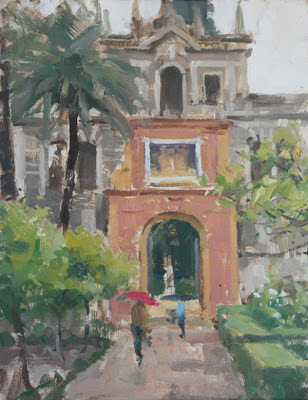 ‘It’s not supposed to rain in May, Royal Palace of Alcazar’ (10x13in, oil on board)
Well, the title sums up this session. In fact, I quite enjoyed working with the closer tones and trying to pull everything together. I was conscious of not wanting to have a forced tunnel composition so I used the figures and foliage to try and break things up a bit. Owing to the conditions it’s not quite as finished as I like and I might need to tidy up a couple of areas but I prefer not to fiddle once away from the subject. 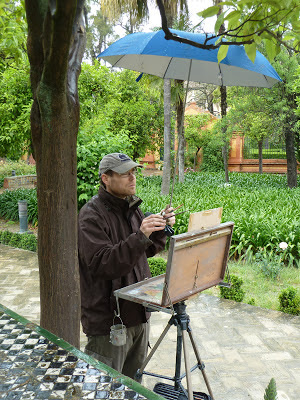 Once the paint started to emulsify it was time to get the umbrella out! 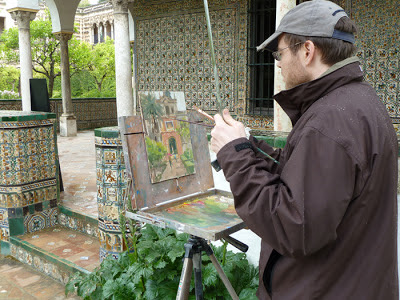 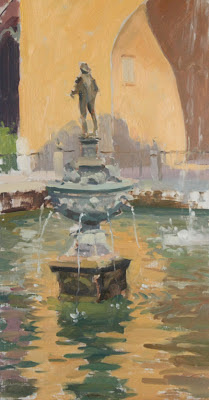 ‘Statue of Mercury, Royal Palace of Alcazar’ (8x15in, oil on board)
Back to the sunshine! It was quite a challenge judging the colour of rendered walls in shadow. The more you looked at them the more they changed! The deep, naples yellow glowed in sunlight and the shadows had an unusual warmth and even greenish tint. You can just make out the cascade of water on the right which came from a raised outlet and dropped into the tank. For some reason it got switched off later in the day but it did make for some nice ripples on the water surface. There were other times of day when it would have been good to tackle this subject but the early morning slot provided some shade and a quiet hour or so before the tourists flocked in. The shadow behind moved very quickly indeed. At the start it looked like this: 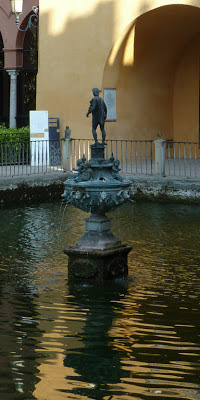 Quite shady and the patterns on the wall were too ‘messy’ for my liking. The statue would contrast better against a brightly lit wall (and we’d clocked that the sun would do exactly that within the hour). 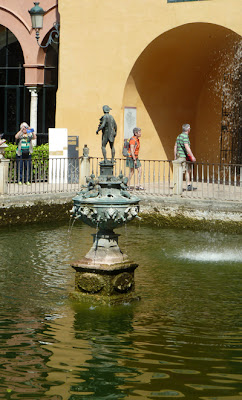 Towards the end, after about 1.5 hours…a completely different scene!
This was one of those subjects where it made more sense to map the drawing in with a bit more care at the start and then work in the colours and tones once the light had settled to the ideal level.
David2017-12-26T10:57:12+00:00