Here is an 8x10in plein air study done on a Saturday morning when we had a rare combination of snow and sunshine (most of the time when we’ve had snow it’s pretty overcast). 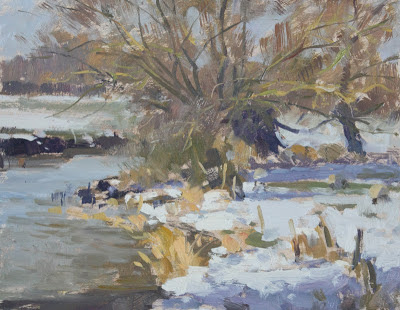 Snow melt, Castlethorpe – 8x10in, oil on board (click image for larger version)
I was perched on a hump road bridge with cars chugging past all the time and had to work fast. I also had a stinking cold but was determined to make the most of the brief weather window of opportunity.
By the time I’d finished the snow on the foreground had almost disappeared after the sun had done it’s work for a hour or so. I was drawn to the ‘S’ bend rhythms and the contrast of warm and cool colours. I was also rather taken with the branch on the right which enhanced the flow of lines. Tones were critical for this one to work and made sure I related each part to the whole as best as I could.
I debated as to whether to add the sheep on the right after they wandered into view half way through. It seemed rude not to so in they went, albeit rather sheepishly….sorry, awful pun 🙂  As the snow melt, it’s nice the way the grass starts to peek through. Some of the nearby ploughed fields turn light pink as the soil starts to become visible and looks a bit odd so I’m glad I avoided those.
I’m in two minds as to whether to attempt a bigger studio version but I ought to give it a go before the spring arrives and the cold weather melts from memory. As the weather’s been so poor recently I’ve been dabbling with a few studio efforts and will hopefully have one or two to post up in the near future. Looking forward to some spring sunshine and getting out and about!
David2017-12-26T10:57:59+00:00