I haven’t posted for a while so it seems a good time having been out painting for most of the weekend in the snow! We’ve had a good thick covering here in Stony Stratford over the last couple of days. Yesterday (Saturday) I was able to get out into the town and decided to head for Mill Lane which is quite an ‘unspoilt’, old fashioned Victoria/Edwardian street that doesn’t get too busy as it’s a cul-de-sac. One passer by told me they’re going to build some modern flats/houses just to the left of where I was standing so it’s nice to paint it before all the construction work starts!

I was keen to get the most out of the day so headed out at around 8:15am with Mill Lane in mind. After some to-ing and fro-ing I pitched up on the pavement and got stuck in, mapping the basic shapes in charcoal on a toned board. I massed in the main tones of the buildings (and everything else that didn’t have much white in) and then worked on the values of the snow/sky. I did it that way round as I didn’t generally want to be working the darks into the light tones. The distinctive colours of the buildings registered quite nicely against the snow and I enjoyed tonal punch that the figures provided. 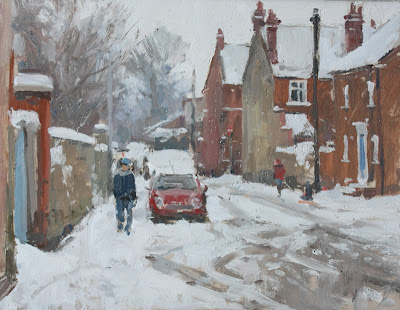 ‘Morning snow, Mill Lane, Stony Stratford‘ – 11x14in, oil on board
A lady pulling a child on a sledge came past me on the left but I added her on the right to create a bit of interest. The mini cooper was fun to put in, as was the slushy tracks in the road. As I was painting at the start I got snow on the palette as I didn’t have an umbrella. This resulted in what seemed like big lumps of grit in my mixes! I’ve not had that happen before but thankfully it got easier as I worked with more paint. 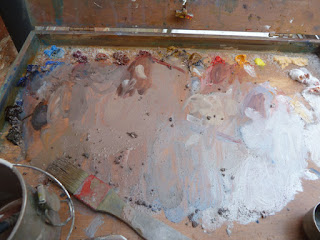 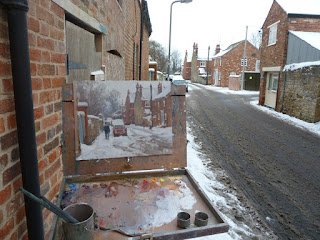 End of session and time for a hot drink!
I found it useful to scrape the snow from under my feet before starting. Otherwise, it gets compacted underfoot and quickly becomes very slippy. One very nice elderly lady seemed most concerned I would get too cold and strongly advised me to paint from inside instead. I tried to explain the issues with working from photos compared to studying it with your own eyes but she wasn’t having any of it 🙂
After some lunchtime soup I ventured out for the afternoon session. I thought it would be nice to head for the country so I strolled off to Passenham but it seemed rather bleak and felt much colder. I also got followed by some cattle that were feeding and suddenly noticed a couple of the bigger ones had horns and so made an executive decision to ditch the country theme and head back to town. I trudged back to Stony (half a mile or so) and the relative comfort of Mill Lane, this time from the other end. I did a little study up there at the end of last year when there was some slush around but wanted to have a better crack at it in a landscape format. Having spent a few minutes deliberating the composition I whipped out another 11×14 and got stuck in. I knew the light would start to fade as the afternoon went on so there was no time to hang about. 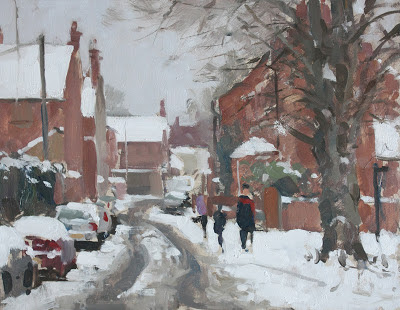 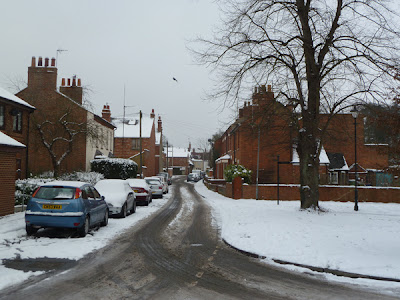 As you can see from the photo, I pulled the tree across to the left a bit in order to balance the composition. The colours/values seem much darker in the photo and shows how tricky it would be (for me anyway) to paint such a subject without being in front of it.
I was pretty whacked after this! Painting outdoors in the snow all day is quite physically taxing, even if you’re well wrapped up. Maybe I could wrap up better. I certainly need two pairs of thick thermal socks and just about got by with my fingerless gloves (that have flip to mitten flaps) and thin liner gloves that have studded rubber grips on the palms and fingers. Great fun though! It’s like being on a painting trip, everything looks so different. I’ll post up today’s effort later but it was practically blizzard like out in the fields which made for an ‘interesting’ session!
David2017-12-26T10:44:55+00:00