I recently spent a very enjoyable week with friends painting along the Cornish coastline (Padstow region). Amongst the crew were David Bachmann, Mike Richardson, John Stillman and Karl Terry. We stayed in a nice place at Trevone Bay and whilst the weather was somewhat mixed there was still a feast of great subjects to get stuck into.

I was glad I had a chance to catch the evening light just a few short steps from where we were staying. The view had tempted me on a number of evenings but the weather & tide wouldn’t play ball (figuring out what the weather’s doing is one thing but the tide adds another layer of complexity!). I do enjoy these sorts of subjects when you have to work quickly and with an intense focus to try to capture the essence of a fleeting moment. Some tiny figures popped up on the rocks and I gently hinted at them to help with the sense of the ‘bigness’ of the subject, even though it’s done on quite a small panel.

A similar sort of experience at Treyarnon Bay, ideal for a smaller format (6x8in) since the scene changed so rapidly! 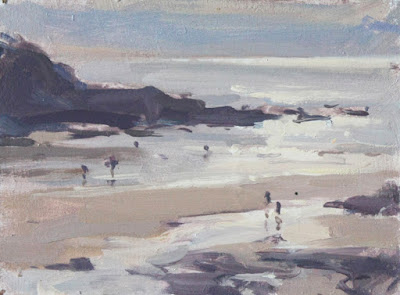 Evening light, Treyarnon Bay (6x8in, oil on board)
In a similar vein, another moment of sunlight was grabbed at Trebarwith Strand with this rapid 8×10 study. I tried not to muddy the colours, taking care to focus on the tonal variations. 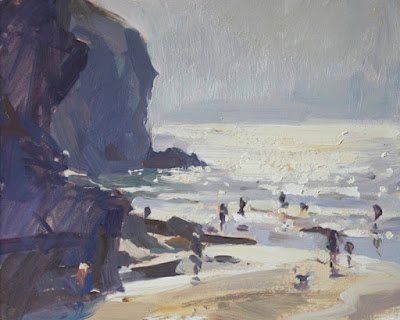 Silvery light, Trebarwith Strand (8x10in, oil on board)
I think because the weather was so mixed, when the sun did appear I was often inclined to focus on the effects of the light. It makes such a dramatic difference when the sun comes out! A couple more from Treyarnon bay where I spent an enjoyable few days with my family last year too, giving it an extra special fondness as a subject 🙂
This one was a more subdued light but it meant I could work on the more subtle colours and at a slightly less frantic pace.

Low tide, Treyarnon Bay (8x14in, oil on board)
A stronger light in this one below, throwing up broader tonal contrasts 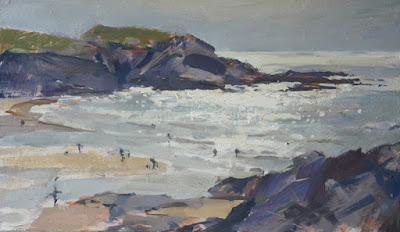 Sun sparkle, Treyarnon Bay (8x14in, oil on board)
We half dodged the rain to try and get something down at Daymar bay. I had an umbrella to stave off the worst of it and right at the end the red barge peaked round the headland with impeccable timing and positioning! 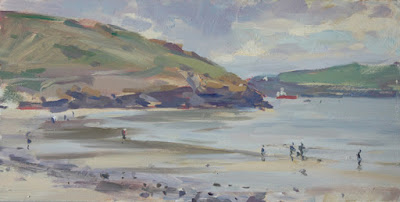 Daymar Bay (7x14in, oil on board)
It’s useful to have beach figures to provide a sense of scale against slabs of rock like the ones at Trebarwith and Constantine. I found the ‘letterbox’ well suited to a number of subjects but I like to mix it up with other formats always so end up taking far more boards than I need. My kit is never light!

Trebarwith Strand, (8x16in, oil on board)

Incoming tide, Constantine Bay (6x14in, oil on board)
A slightly larger piece (12x16in) in a more conventional format from Constantine. With the way the light and tide change (amongst other things), I find 12×16/18x14in are pretty much the largest I can manage in a single session. I’d love to try bigger though, perhaps over a couple of sittings but it’s rare to get the same sort of conditions and I often feel the ‘vibe’ has changed when I return to something a second time. 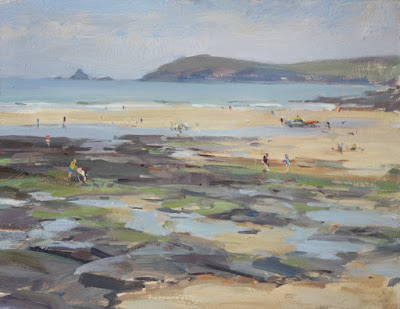 Rock pools, Constantine Bay (12x16in, oil on board)
Below is a photo overlooking Bedruthan – from the left Karl Terry, John Stillman, myself, David Bachmann and Mike Richardson.