Not long back from a lovely painting trip to Sennen with painting pals. Amongst the crew were Tim King, Mike Richardson and Mike Worthington. We stayed at Atlantic Lodge which sits above the cliff overlooking Whitesands Bay and the weather was pretty well behaved for most of the week.

There’s something about Cornwall that really captures the imagination and I’m like a child in a sweet shop whenever I visit. I was really inspired by the colours in the water and waves this time round. Here’s a small study of the waves, an enjoyably simple subject using the rhythm of the waves and rocks to construct a composition. The channel of middle distance rocks are apparently known as the Tribbens. 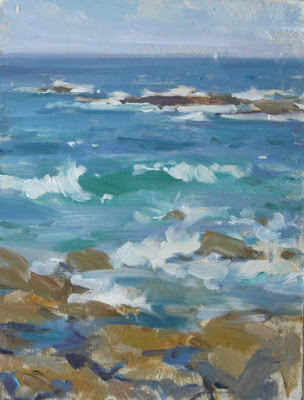 ‘Towards the Tribbens, Sennen’ – 6x8in, oil on board
By contrast, we painted the waves in a testing force 7 gale on two occasions and it was something of an adrenaline rush to say the least. We all found it pretty exhilarating and had that lucky combination of high tide, high wind and early evening sunlight. The waves tend to form a repeated pattern which you can hook into and I aimed to keep the colours as clear/fresh as possible. The hardest part is keeping your hand still in the high wind to apply the strokes. Fortunately my tripod has a hook which I hang my heavy backpack from (not travelling light does have its advantages!) 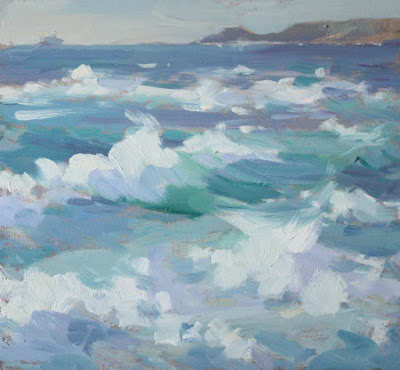 ‘Force 7 waves, Sennen’ – 9x10in, oil on board
More delight with waves and colours in the water on Porthcurno beach. I’ve never painted on this beach and the colours were too good to resist. It was really windy though and I got caught out by the tide when a freak wave rolled in and soaked my kit. I had to move my pitch twice to stay ahead of the water. The wind blew sand all over the painting but I’ve left a few grains in the sand area as a little momento 🙂

‘Wave watching, Porthcurno’ – 8x16in, oil on board
I enjoy trying to capture the essence of a subject in a small painting and they are quite a nice option to paint at the end of the day after trying some bigger pieces. The surfers and body boarders were keen to take advantage of the waves too. 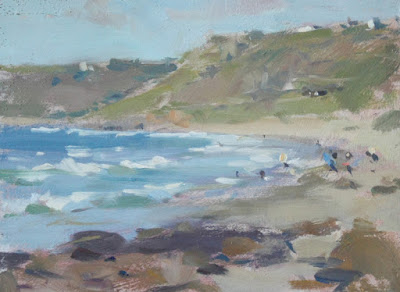 ‘Evening wave catchers, Sennen’ – 6x8in, oil on board
I found a slightly elevated spot to paint the bay and that helped make the most of the reflections in the wet sand. It was very windy though and the sun kept popping in and out. I opted for sun ‘mostly out’ and tried to memorise the tones/colours so I could carry on when the sun was in. The figures/flags (needed a steady hand to paint with the wind) help give a sense of scale. 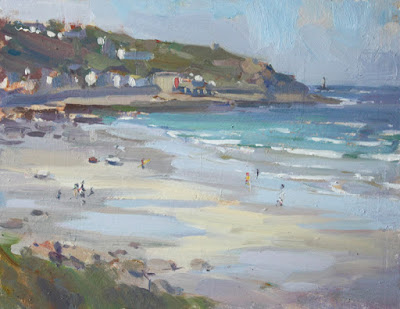 ‘Bright and breezy, Whitesands Bay (Sennen)’ – 10x13in, oil on board
Another small evening painting done on a hill top looking back towards Gwenver beach at Sennen, It was so windy I had to sit on the ground with my paint box on my lap. It was high up so the figures looked like tiny ants! 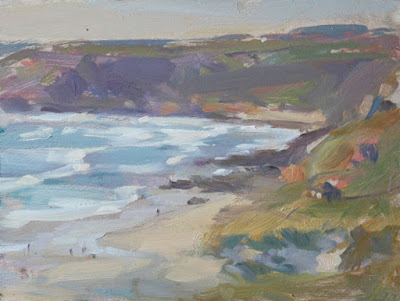 ‘Towards Gwenver beach’ – 6x8in, oil on board
One sunny day I headed to Porthchapel with Tim King and Mike Worthington. We all had an enjoyable session and did our best to find sheltered spots away from the high winds. Fortunately the sun was shining which brought out all the colours in the water. When painting this one towards Hella point there were lots of wild flowers in the foreground but I ended up being very restrained with them as the colours would have been too much. 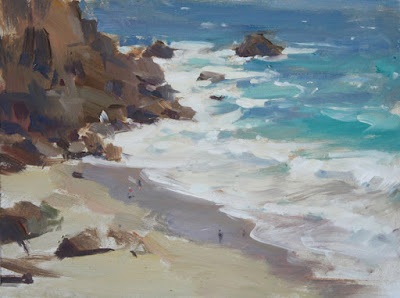 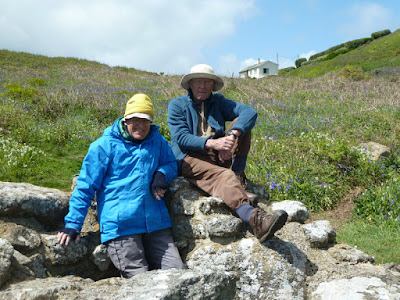 Tim and Mike, contentedly posed after an enjoyable session at Porthchapel Cove 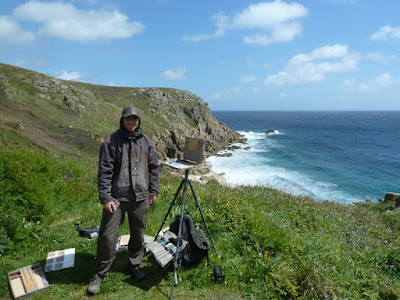 Just finished! At the end of the paint session at Porthchapel.
I went back to Porthchapel another day to catch a favourite view of mine perched from the cliff top looking down on the cove. I’ve painted it a couple of times on previous trips and couldn’t resist a return visit. I like the way that finger of rock at the top juts out into the water which forms some nice patterns on the sand. The sun went in (and the tide quickly receded) about half way through so the last half I was part painting from memory. 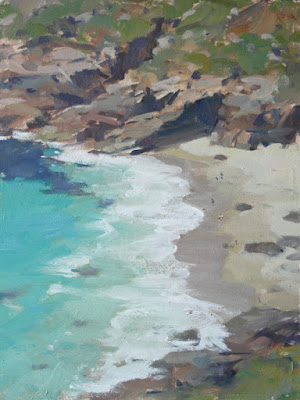 ‘Looking down, Porthchapel Cove’ – 12x16in, oil on board
There’s a nice view looking down towards Sennen from a spot near our accommodation and I decided to have a go with a larger board (14x18in). The sun was in and out but there wasn’t much wind to contend with and I tried to make something of the cloud shadows on the hillside to add some interest. I liked those spiky fronds on the trees and decided to use those as a foreground interest rather than the row of houses which sit just behind them (you can see one rooftop in the bottom left) and they make a forceful diagonal line with is quite tricky to manage in a composition. A hint of the dusty path in the foreground helps to break up the greenery. 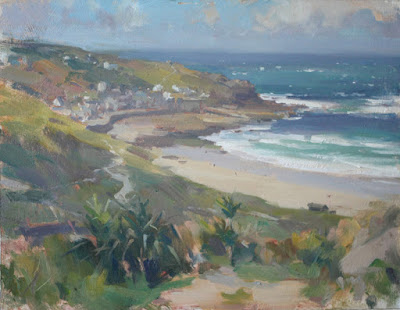