A couple of weeks ago we had a scorching weather weekend so I decided to take advantage and head for the Dorset coast for some painting around Studland Bay. A few years ago I visited Old Harry Rocks with David Bachmann, Tim King and Valerie Pirlot and we were all pretty awestruck by the sight of the gleaming white chalk stacks. They really are a majestic sight in the sunshine and there was plenty of that with the temperature nudging 32 degrees.

To ensure not getting burnt I was smothered in factor 50 and pretty well covered up, including one of those desert caps that has material on the back. I no doubt looked ridiculous but at least I wouldn’t go home looking like a lobster. I also had my new custom umbrella rig which works well with the tripod/pochade setup and provides shade for the painting/mixing surface. It was still pretty brutal in the heat and I took loads of water to keep hydrated.

Over a day and a half I managed to get five paintings done. I thought the subject lent itself well to a wider format and had a go with a bigger board (12x24in).

‘Late morning, Old Harry Rocks’ – 12x24in, oil on board
It was interesting to see the contrast in the later evening light with warmer light and the shadows cast from the other side. I ended up painting this after trudging the 20 minute hike back from the car park having realised I’d lost one of my hats somewhere on the headland. I don’t think I would have returned if I hadn’t lost the hat and as an added bonus I found the hat snagged on a tree branch I’d ducked under on my way down previously!

‘Late evening, Old Harry Rocks’ – 7.5x15in, oil on board
In addition to having the activity of the distant boats there was the added bonus of having some smaller vessels and kayaks around the rocks themselves. It’s actually quite a noisy spot with all the jet skis and pleasure boats buzzing around. I tried a couple with different, slightly deeper formats this time round. 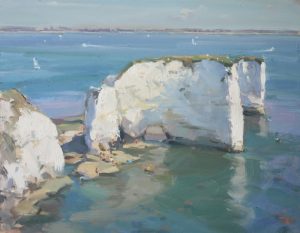 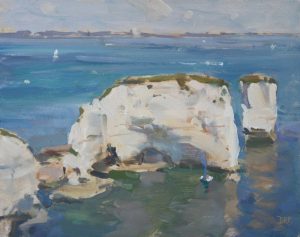