The Algarve in Portugal is such a great place to paint. Inspiration is easily found amongst the dramatic cliffs and beaches and at this time of year the vegetation is quite lush with many wildflowers and more unusual looking cactus, yucca, palms and olive trees.

I loved the colours of the rocks and sand which had a unique warmth in the sunshine. Even in more overcast conditions there is much to offer. The painting below was done from the pier in Lagos and perched on the right is the Mayor’s residence. I was lucky with the timing of the tide with this one.

Here’s one below done just after the above, again from the pier in Lagos. I wanted to capture the warmth from the ochre/sienna stone in the cliffs which takes a bit of getting used in painting terms. The shifts in colours/tone were often very subtle, as was the aerial perspective. 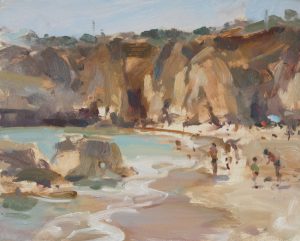 ‘Warm cliffs, Lagos beach‘, 8x10in – oil on board
We found an interesting subject with the rooftops of Luz in the foreground where I painted alongside Tim and Valerie whilst the others headed down towards the beach.

‘Looking over Luz’, 8x12in – oil on board
It was quite a challenge to make the warm cliffs recede, especially on overcast days. It ended up being very subtle shifts in tone and colour and often with surprisingly little blue (perhaps reduced by the warmth of the local colour in the stone) 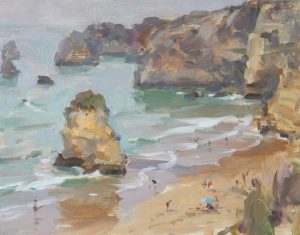 ‘Sea stack, Praia Donna Ana‘, 11x14in – oil on board
There was an old fort perched on the headland at Sagres and myself, Tim and Haidee opted to paint it whilst the others were camped just down the road. The light was quite strong as it was mid afternoon and I was flagging in the hear a bit. After a couple of false starts I managed to make some sort of  composition which just hinted at the fort in the top right. The distant headland and fort were both very long and flat so it was a tricky subject to deal with. 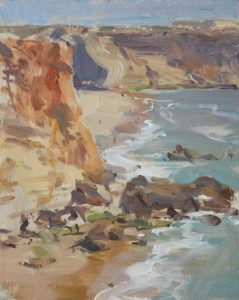 ‘Fortaleza de Sagres‘, 8x10in – oil on board
I hiked around loaded with full kit in the baking heat for too long before attempting the one below. Having marched along the cliffs I thought I’d just try the beach below but it was about 150 steps down a long wooden staircase! Still, the subject was a real treat and I was tucked away at the back of the beach, keeping topped up with factor 50 as the sun was fierce and at it’s highest point. I loved the way the rocks seemed to have subtle reflected light bouncing off from different sources. 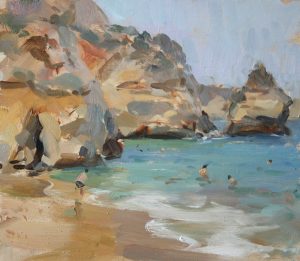 ‘Bathers at Praia Da Camillo‘, oil on board – 10x12in
For something a bit different I painted a couple of pieces around the garden and this arrangement below caught my eye with the lovely white walls creating strong angles to contrast with the softer plants. 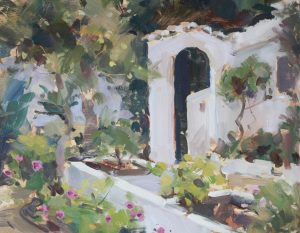 The piece below was painted on a very dull/wet afternoon and I was lucky to find a spot that was vaguely sheltered under a tree. However, the rain intensified and eventually I struggled to see what was on the painting or palette. Still, glad to have captured something from the moment. 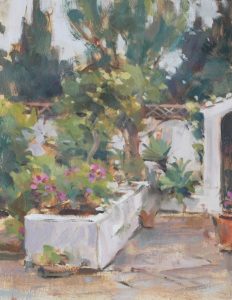 ‘Terrace with plants’, 11x14in – oil on board
Some of the most dramatic coastline we saw was at Praia Da Cordoama which we also viewed from a loftier perch before heading down closer to paint. I love this sort of subject and you feel very in touch with elements whilst at work. In terms of painting experiences it doesn’t get much better in my book 😊 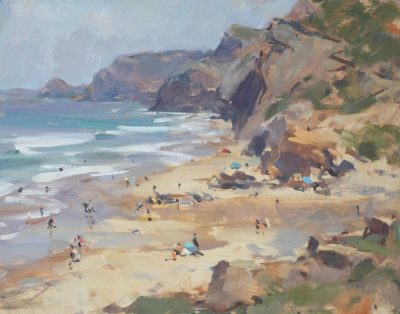