At the end of September I spent a fabulous few days painting with friends in Venice. Amongst the crew were David Bachmann, Herme Bachmann, Tim King and Wyllis Heaton (all the way from California!). It was such a good trip all round and I hope the paintings in some way reflect the impact that Venice had on me this time.

The weather was a startlingly sunny contrast to previous trips and we were blessed with almost constant sunshine. Venice really does sparkle in the sun and I’ve always wanted to experience it in those sorts of conditions. I decided to try and explore some different parts of the city that would be a bit off the beaten track and less flooded with crowds. We now have quite a good knowledge of where might be best to head for (and best to avoid) and that certainly helps when it comes to the paintings.

The subject for the painting below was a real find in Dorsoduro and the yellow house with that punchy green tree was too good to resist. It’s nice to see Venice when there are trees with foliage as there aren’t that many and they make interesting contrasts with the architecture. 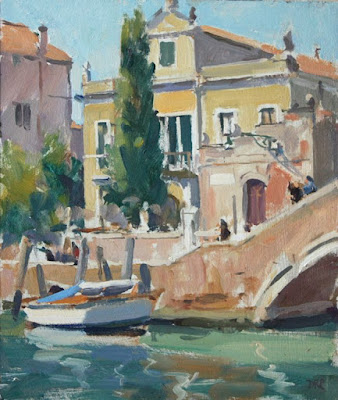 The yellow house, Rio Del Carmini
Oil on board, 10x12in
There was a nice warmth to the subject for the painting below and a I wanted to try and capture the subtle harmonies of tone and colour that seem to bounce around the buildings and into the water. 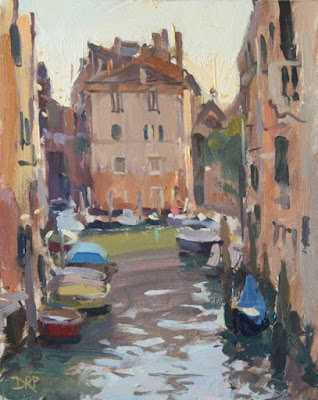 Late afternoon, Rio De La Panada
Oil on board, 8x10in
I’ve always wanted to paint the facade of the Salute close up and I’ve long admired the works by the likes of Sargent and Seago who I think painted it from boats on the Grand Canal. You’d need a small mortgage to paint from a Gondola in Venice these days so I settled for this spot on the Dogana instead. The light moved very quickly and after about an hour the whole facade was completely in shade so I focused on capturing the lighter passages early on. 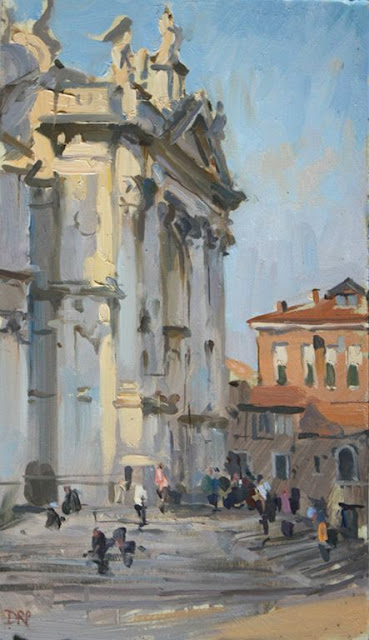 Morning light, Santa Maria Della Salute
Oil on board, 8x14in
The painting below was actually a second attempt at the same subject (the first attempt was a wiper from the previous day). Having had a ‘trial run’ it was actually useful in getting to understand what the light was doing and the nature of the tones and subtle colour temperature shifts. There was a facade to the right which was in full sunlight which bounced a fair amount of seemingly impossible warmth into the shadow areas which made it quite a challenge to pitch at the right levels. The light moved quickly so once again I went for the light parts early on before they disappeared into full shadow. It’s a fascinating subject though (with some complex shapes in perspective to decipher) and I was happy to have got closer to what I’d aimed for with this piece. 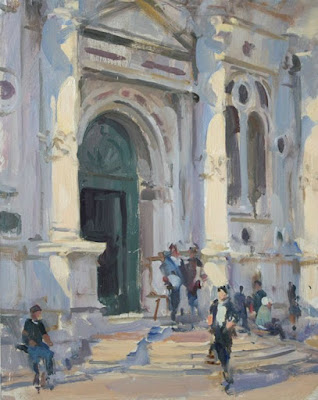 Early morning, Scuola Grand Di San Rocco
Oil on board, 11x14in
After painting the front of the Scuola and fuelled by a 2.5 euro ‘cappucino & pan au chocolat’ I went round the back of the building to paint a nice little view from the small bridge overlooking the campo. The sun created a nice shadow on the columns on the right which I wanted to include in the composition. 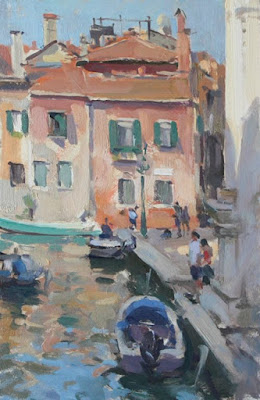 The Ospedale is another subject that’s been on my ‘must paint’ list and thankfully we were there when the light seemed pretty good. Tim and I stood side by side on the bridge painting this one and we worked at some pace to capture the fleeting light as the sun sunk at great speed. The marble facade has some unique tones and colours in the shadow sections (lighter in tone than I expected) which contrasted quite markedly with the warmth of the sunlit sections 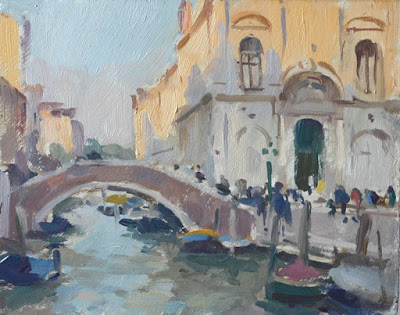 Fading sun, Ospedale, Campo Giovanni E Paolo
Oil on board, 8x10in
Tim and I chanced an evening sortie into the somewhat unknown area around the Madonna Dell’Orto and were rewarded with this subject below. The colours really are quite something when the light is like this. 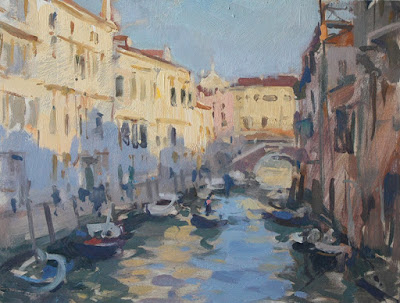 Evening light, Rio De La Madonna Dell’Orto
Oil on board, 10x13in
David and Herme went for an explore along the Zitelle and recommended that I join them. I was delighted to find they had discovered this subject and I didn’t hang about having a go myself. It also had the added bonuses of being a blissfully quiet spot and standing in the shade too. 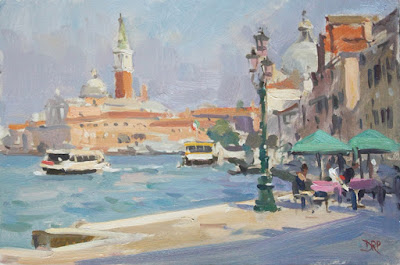 Afternoon sun, along the Zitelle
Oil on board, 8x12in
We all headed down to Campo San Barnaba in Dorsoduro on one morning and our intended subject was off limits so we pitched up in the main square and I opted to paint Wyllis who was stood under a cluster of flags across the canal. 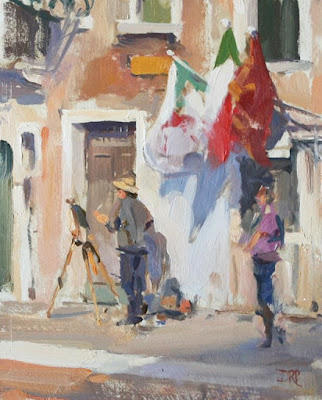 Artist at work, Campo St Barnaba
Oil on board, 8x10in
At the end of the first day we’d all gathered on the Riva in the evening so I had a go at a little 6×8 to try and capture the light effect looking towards the Salute. The sparkle was bright so I spent most of the session squinting hard! I wanted to make sure I identified and included the critical elements to define the subject without getting bogged down with unnecessary detail. 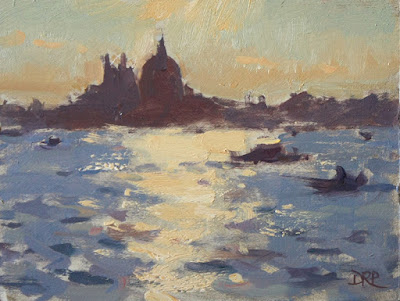 Evening sparkle from the Riva
Oil on board, 6x8in
I was determined to paint Colleoni statue at some point. It was the last day and I was running out of gas so it took a couple of attempts to get something worth keeping. I ended up with quite a tiny panel (5x9in) and it was nice the way the sun was starting to dip. The marble on the statue is a tricky colour to work with and has a cool, greenish tint in certain parts which are amplified (but still quite light in tone) when in shadow. 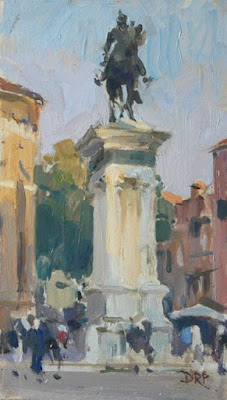 Colleoni Statue, Campo Giovanni E Paolo
Oil on board, 5x9in
We managed to find some nice subjects in the San Toma area and this is a subject looking back up the Grand Canal towards Rialto. The Gondolas have such distinctive shapes and made a nice feature in the foreground. The Vaporetto boats are such a part of the hustle and bustle on the canals and they often make good focal points since they follow the same path so you can get a reminder of how they look every few minutes or so.