Not long back from an enjoyable few days painting with pals in Venice. Among the line-up were David Bachmann, Karl Terry, Tim King, Tony Dakin and myself staying at Ken Howard’s impressive studio and we were also joined by Paul Rafferty, Robbie Murdoch and Eric Underwood who stayed in nearby hotels for a few days.

Out of the 5 days of painting we had about 3.5 days of heavy rain combined with a high aqua alta that cut parts of the city off so we needed to be careful where we ended up at the high tide point. The city seems to take the flooding in its stride, shops open with 6 inches of water etc but it’s not ideal if you don’t have a pair of wellies! On previous occasions I’ve visited in the winter but this time we were hoping for better weather in early autumn. We made the most of the cameo appearances from the sun with frenetic bursts of activity. I was quite surprised at how much busier it was but after a day or two you start to become immune to the mayhem to a certain extent.

Anyway, onto some of the fair weather paintings. This one above was my first painting, well, actually it was the second but the first was of the same view but with less width and got wiped (no sense wasting a good board!). The weather wasn’t too bad on day one so I tried to capitalise whilst we had the chance. To our immediate right was the bridge of sighs so you can imagine it was a busy spot with everyone jostling to take a photo right next to us.

‘Towards the salute from the Piazetta’ – 6x14in, (click image to enlarge) 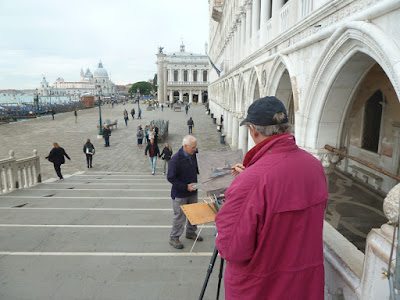 David Bachmann and Tim King setting up before the hoardes arrived.
Next one for keeps was the main square and I quite liked having the scaffolding on the right as the asymmetry is quite appealing and it helped emphasize the cast shadow from the Campanile on the right. I wanted to keep everything as crisp and fresh as possible so kept the marks clean and direct. I remember a couple having what seemed to be a brief wedding photo taken on the left and the bride had a lovely yellow dress which I noted down before they swiftly disappeared. I love those little incidental things that bring a subject to life when you’re working on location. The light moved so fast it was like watching a sundial with the shadow moving across the screen on the right before it became fully lit in next to no time. 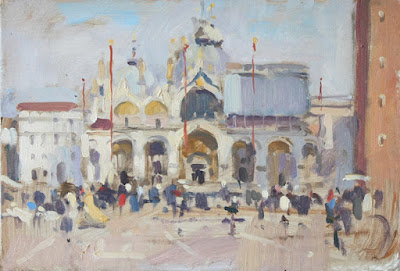 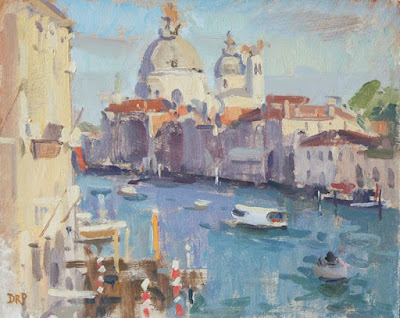 ‘Salute from the Accademia Bridge’ – oil, 8x10in
I seemed to choose all the busiest places on the first day and the Accademia bridge was no exception. Barely room to set up the tripod but I found a pitch and got stuck in with less than an hour of decent light remaining. Working fast seemed to give the painting an energy that I was keen not to overwork, just aiming to capture the essence of the moment really. 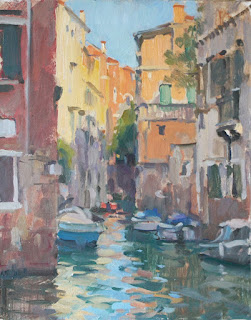 ‘Rio Del Tolentini, early morning’ – oil, 11x14in
Another tantalising glimpse of the sun in this one of a canal near the Scuola Grande di Dan Rocco (a building masterfully painted by the likes of Sargent and Seago). I had to tidy this one up a bit at home afterwards as it was done at breakneck speed with the light all over the place. Managed to get the key tones and colours down on the spot which helped. 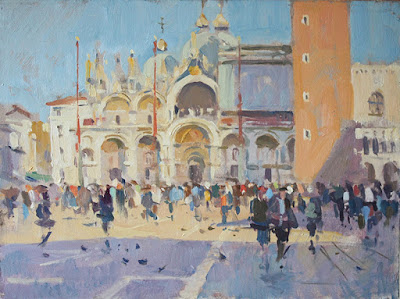 ‘San Marco, afternoon shadow’ – 12x16in
I had another go at St Mark’s in the sunshine but this time making the most of the shadows being cast across the square. It was bigger too at 12x16in and I was in two minds as to whether to paint from this spot (standing next to Tim who did a very nice job of the same subject) or stand so I was looking through the arches at the fully lit Basilica. I think this works better as the dark tones of the shadowy arch would probably have spoilt the overall effect or light. 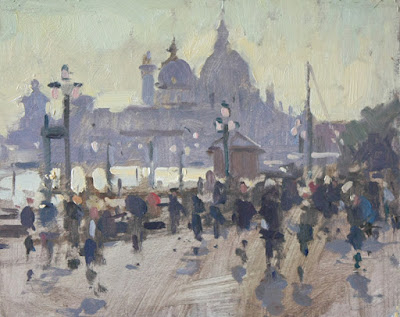 ‘Bright sunlight, Looking towards the Salute’, oil, 8x10in
I was lucky to find a perch on one of the spare walkways used when the city floods and this meant I was blissfully separated from the deluge of tourists passing me on the bridge to my right. It was handy being slightly elevated because it meant I could see more of the water rather than just a sea of people. The light was superb (pretty well contra jour) and I tried to capture it with as much economy as possible.
More to follow, including the rainy ones!
David2017-12-24T11:56:20+00:00October 22nd, 2015|2 Comments