It’s been a while since I posted anything so time to remedy that! It’s generally been a pretty wet January but there have been the odd glimpses of sunshine which I’ve tried to grab on a couple of weekends. Nothing too ambitious, keeping it local as the days are so short and I don’t want to be travelling too far.

This was a broken tree I glimpsed late one afternoon near the village of Nash and the sun was shining fully onto the exposed ‘innards’ of the branch. HAD to try and capture something of that. I parked up and got to work as the light was changing fast. Within an hour it would almost be gone! 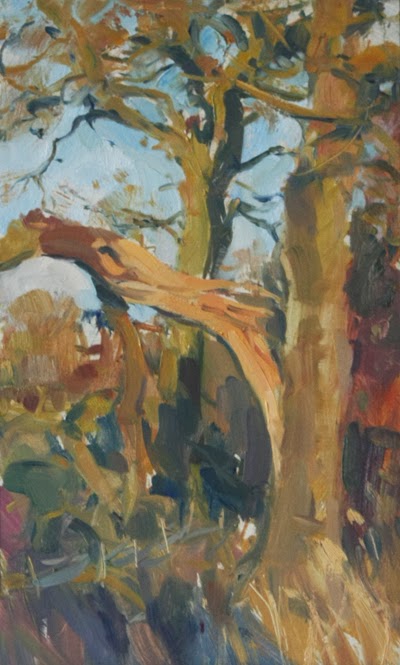 Broken Ash – 9x14in, oil on board
I’m hoping to attempt a larger version of this in the studio, perhaps with some compositional tweaks. Quite a tricky one to scale up because there are a few areas that lack definition in terms of tone/colour/detail. I must admit I quite like the idea of making sense of a sort of visual tangle, trying to create shapes and rhythms that capture the essence without getting too fussy (no time to be fussy anyway!). I find this sort of subject much easier to paint on location than I do in the studio. It’s all those little pieces of information that you notice there and then that help along the way.
Next up, a very quick 9x7in done as the light was fading. This is the meadow and river just a few hundred yards from where I live. As a result of working so fast, the paint application was quite forceful in parts but I actually quite liked seeing a few ridges of paint! 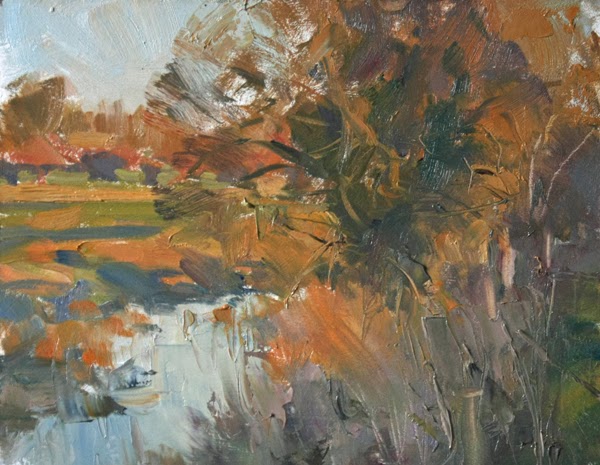 Winter light, Passenham meadow – 9x7in, oil on board
Finally, this one from a spot near Castlethorpe was done on a cold day when I’d forgotten my gloves. It took a couple of hours for my hands to come back to life afterwards! I was interested in the unusual rhythms of the branches and the winter light added a bit extra.