Last week I spent an enjoyable day with some ROI members and friends at the Winsor and Newton HQ in Shepherd’s Bush. We had the added bonus of getting a tour of the development labs where new colours are researched for various product ranges. Interesting to see how some colours fade in the ultraviolet ovens!

Anyway, Ian Cryer (ROI President) steered us towards a speedier format with short poses.The half hour window proved to be an interesting challenge where we had to be sharp and incisive in both observation and execution. I think with all of them I could have done with an extra few minutes to pull things together but I guess that would then defeat the overall objective so the portraits will remain in their somewhat sketchy state. Overall, I really enjoyed working in this way and hope to do more of it in future. It’s refreshing to work in different ways and step out of your comfort zone. Nice to meet up everyone and great to see the mix of styles and approaches too. 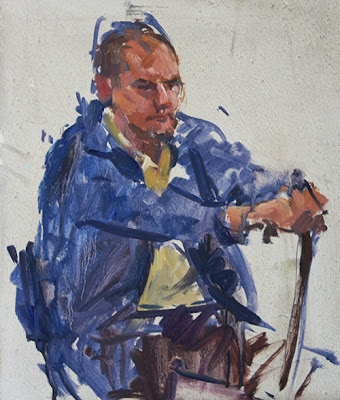 ‘Ian Cryer (PROI)’, oil on board (10x12in)
I liked the way Ian created a sort of ‘distinguished’ pose with the walking stick so I opted to focus on the bigger, overall shape rather than doing a head study. 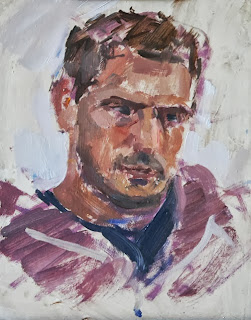 ‘Tim Benson’ (VPROI), oil on board (10x8in)
The good thing about the quicker poses is that you’re drawing more directly with paint, making all sorts of instinctive marks. With that if often brings a unique sense of energy. There isn’t the time for too many misplaced or misjudged marks so the emphasis turns towards making each mark really count for something. 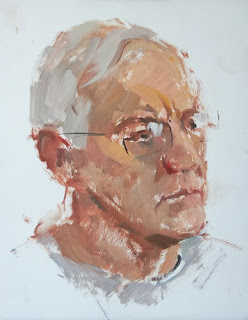 ‘Tim King’, oil on board (10x13in)
Tim happily acknowledged how everyone had successfully captured his ‘comb over’! I try to use notes of contrast where possible, thick/thin, hard/soft, dark/light, cool/warm…all useful in constructing the image 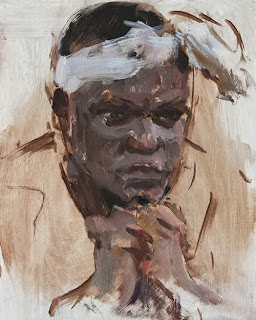 ‘Adebanji Alade (AROI’), oil on board (10x13in)
Great, intense pose from Adebanji who threw down the gauntlet with a head tie and the use of hands in the pose. You were right Adebanji, it did make it more challenging! 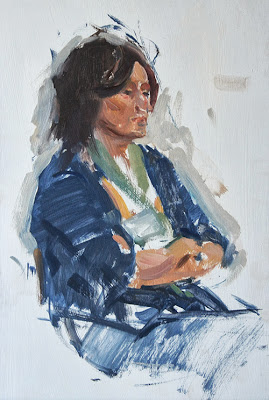