The urns in the palace gardens made great painting subjects. My first attempt was an 8x16in, focusing exclusively on the urn and framed nicely by the dark foliage. The sun couldn’t decide whether to stay in or out but I opted for a ‘sun in’ rather than ‘sun out’. 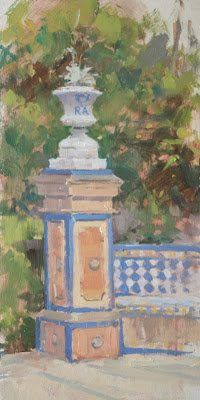 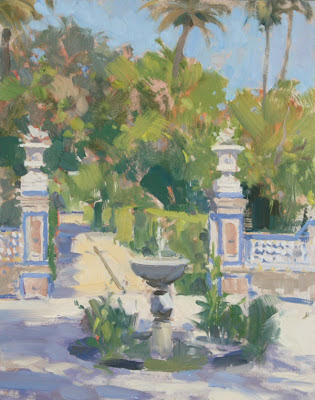 ‘Fountain and urns, Royal Palace of Alcazar’ (10x14in, oil on board)
It was the sense of light/heat that I wanted to nail in this piece and I was lucky to find a spot where I could paint in the shade. I liked the contrast of the architectural structures with the more organic elements of foliage. Once again, palm placement needed to be thought out and close observation of tone/temperature was needed. The sunlit paving area in the foreground was surprisingly cool compared to the path in the middle distance. It was nice to have the complimentary blue/orange notes from the urn pillars and benches. Quite a lot of drawing too for a subject that appears quite simple. 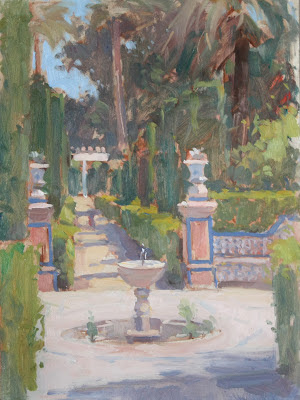 ‘Garden fountain with urns, Royal Palace of Alcazar’ (10x14in, oil on board)
I was so taken with the urns I fancied another shot and this was my last painting in the Royal Palace gardens. I thought the tall hedges and palms made it sufficiently interesting to warrant another attempt.  Notice the hint of warm reflected light on the underside of the fountain. Light seemed to bounce into all sorts of places and it was great fun to paint. I decided not to put in the lady with an iPad who decided to sit against the urn pillar for the best part of 20 minutes. 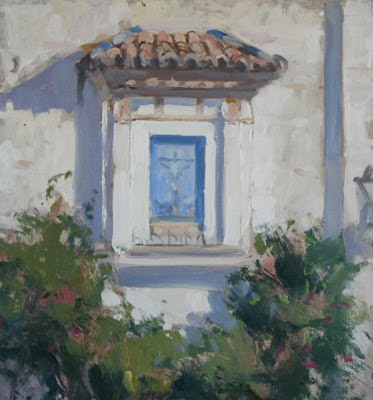 ‘Plaza De Alianza, Seville’ (9x10in, oil on board)
Another one that was too good to resist having a go at. The light moved so fast but those cool shadows on white walls were irresistible. 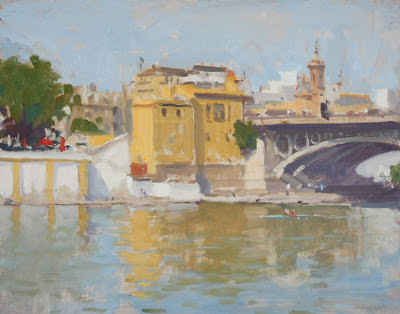 ‘Puente De Isabel, Seville’ (10x13in, oil on board)
Eric and I wanted to try this mid morning view across the river and we found a handy spot of shade behind a large sculpture. There was a loose wooden cycleway over the cobbles behind us and a constant rattle as cyclists went past on their bikes. Still, we didn’t have much trouble focusing as it was such a good subject. The light shifted surprisingly quickly and by the end of the session the yellow side of the tower facing us was almost entirely in shadow. It’s amazing how many people you see rowing on the river. Apparently it’s used as a training destination for many athletes so it seemed wrong not to put one in! 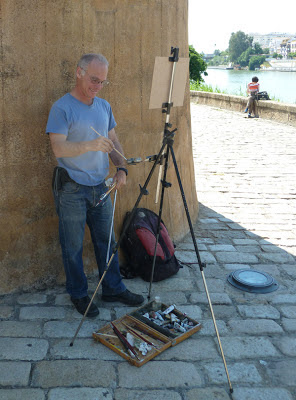 Eric Davis paints the bridge in the relative cool of the shadow from a piece of public sculpture. Eric and Tony kindly treated us all to a barbeque on Eric’s roof terrace one evening which coincided with a freak thunderstorm! A quick dash inside and we all had a good laugh 🙂 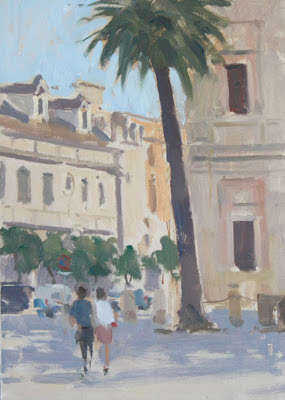 ‘Palm, Evening in Cathedral Square’ (8x12in, oil on board)
This was a ‘bonus’ study, done after a full day at the easel but just enough left in the tank to have a quick go. Behind me were several wedding processions, outside the gates of the Royal Palace. Not a bad place to get married, I’d say! I enjoyed painting palms, they can add quite a dynamic element to the design of a subject. Even though the building on the right is in shadow it was quite light in tone. The palm trunk brought a nice dark punch to the proceedings. The smaller distant trees are Seville orange trees which were dotted around in many places.
It was a great trip with great company/hosts and I now have a real taste for painting in the sunshine. I really wanted to try and capture something of the essence of Seville and say something about the light, colours and atmosphere. I didn’t wanted to get too fiddly or fussy with detail and since much of the subject matter demanded plenty of drawing this approach was better suited to the slightly larger formats (mostly 10x13in and 11x14in). I would certainly recommend Seville as a fantastic place to paint, especially this time of year when the temperatures are so pleasant. 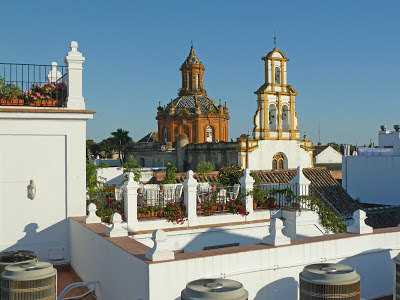