We did get have a a day or so of sun but the light moved quickly on the short winter days. No time to hang about then! 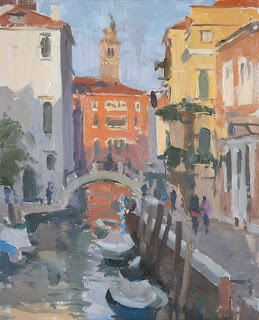 ‘Late afternoon, Fondamenta Venier Sebastiano’, oil on board, 10x8in
The one above was painted at speed as the shadow from the sun crept up the buildings. I really loved the scene as it had so much going for it…the warm/cool contrast of light, water, boats, people and a leaning church tower (not a mistake with my verticals I hasten to add!). 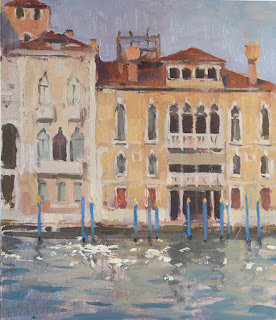 ‘Across the Grand Canal from Fondamenta Salute’, oil on board, 8x10in
I painted this one above alongside Tim in the shadow of the Salute (a handy sun sheild for our boards). Usually, you get sparkle on the water when looking against the light overhead but in this instance the sparkles seemed to be reflecting back off ripples that were facing the light behind us. It was enough to draw us in but the sparkle didn’t last long. Those windows on a small scale can be darn fiddly. 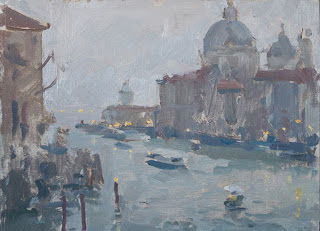 ‘Fast fading light, Salute Maria della Salute’, oil on board, 6x8in
This little study was done at breakneck speed, probably 30 mins or so but I think it caught the atmosphere even if it might seem a but scruffy in parts. I was all painted out after working since dawn but thought it was worth a shot as I was in the perfect spot on the Accademia bridge. I loved the way the faint line of lights on the horizon softly emerged through the distant veil of fog. 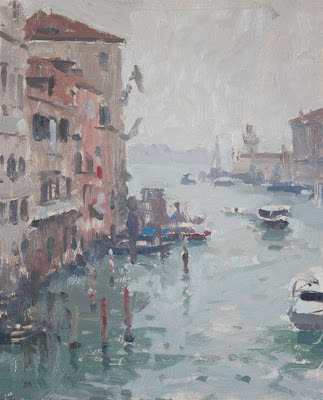 ‘Fog from the Accadmemia bridge’, oil on board, 10x8in 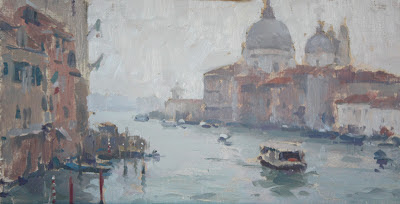 ‘Fog, Salute Maria della Salute from the Accademia bridge’, oil on board, 6x8in 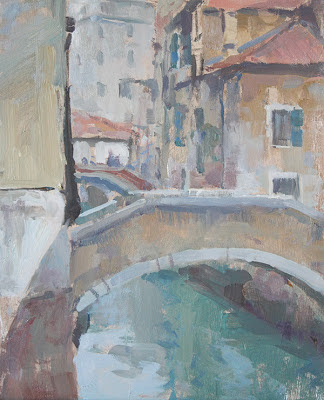 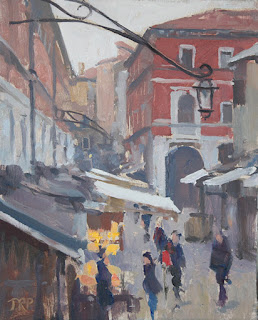 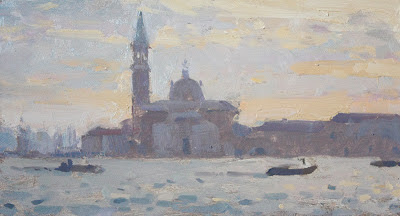 ‘Early light, St Giorgio from the Dogana’, oil on board, 4x8in
And so ends another fantastic trip. Roll on the next one I say. I feel like I’ve barely even got started in Venice! Great fun, a mixed bag of paintings…some better than others…one or two wipers but that’s the way it goes working plein air (for me anyway). One hit is all you get but a darn good feeling if it comes off the middle of the bat 🙂 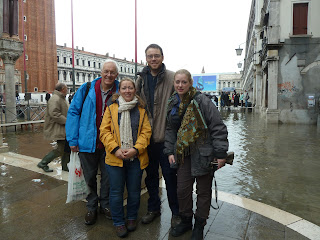 Tim, Haidee, me and Valerie in front of the acqua alta which arrived on our last day. 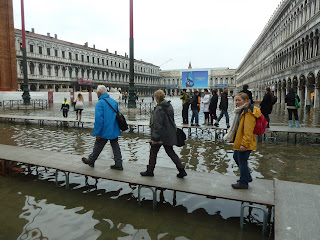 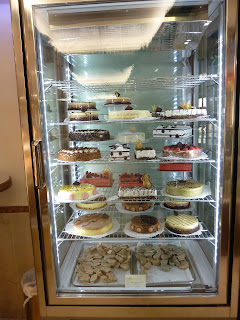 Delicious cakes and hot chocolates served on every corner!
As we were leaving, Tim couldn’t resist a farewell (and rather accomplished I might add) blast on the harmonica, much to the amusement and delight of all the passengers.
David2017-12-26T10:50:28+00:00