I recently spent a relaxing few days on a holiday with my parents on the north Norfolk coast. It was much needed having spent the last few weeks stuck at home. I wasn’t too sure if I’d be able to do much painting but the sea air seemed to give me a boost, along with the fine weather! Over the 4 days it was mostly sunny and there were even some surfers braving the cooler temperatures (I think it was 11 degrees that day) at Cromer.

Being slightly out of peak season meant it was less crowded and easier to get about and park. This is my third outing along the north norfolk coast and I’m starting to get a feel for the place in terms of painting. It’s not just about the views, there’s the time of day, type of light and tidal patterns to consider amongst other things. The great thing about going back to familiar areas is that you don’t waste lots of time trying to hunt around for subject matter that sparks and interest. For me, that spark has to be there otherwise it’s difficult to connect with the moment.

I managed to get six pieces done. They might need a bit of tidying up but I thought I’d post them fresh from the easel (or pochade box!). I’ve posted them in the order they were painted 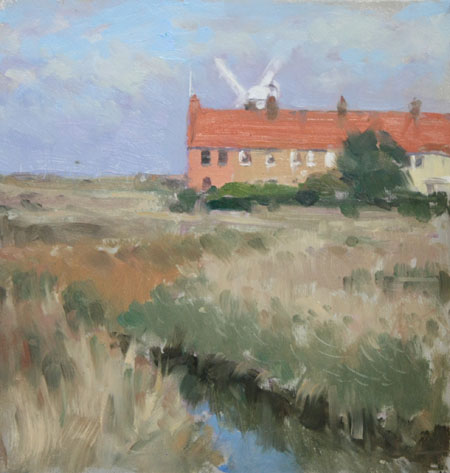 Cley Mill from the bridge (west side) 10x9in

I liked the slightly unsual view of the famous windmill and Cley-Next-The-Sea. My first plein air effort for several weeks! I enjoyed working with the subtle variations of colour and tone in the reeds and trying to gently steer the eye through them towards the windmill. 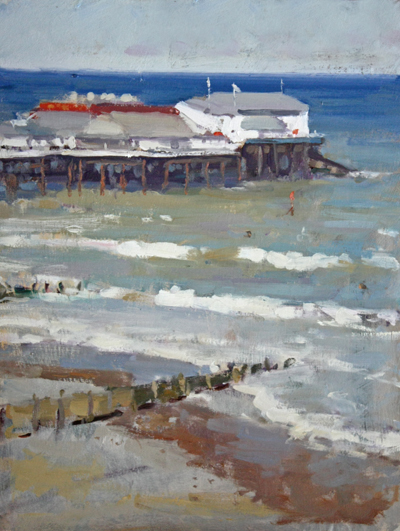 This was the next morning in Cromer. The pier is a great feature of the sea front and the colours of the sea made for an interesting study. I was working from an elevated position and standing in the shade of the buildings behind me (this made it rather cold!). I put a couple of surfers in at the very least to show they were there! I liked the way the sun lit up the pier and the rusty legs on which it stands. This contrasted nicely with the deep, intense blue of the distant water (yes, it really did seem that blue!). The tide moved quickly and by the end of the session the beach had disappeared.

Cley Mill, 10x22in
This was done in the afternoon (on the same day as the Cromer piece). I almost went back to base camp but the light was too good to resist. On a previous trip I’d painted from a similar position but was disappointed with the end result. Having learnt a few lessons (and making mistakes can often be the best way of doing this) I was happier with the outcome this time, not leaast because I opted to work on quite a large (for me) canvas using the French easel. It was that last 1.5 hours of sunshine so the light shifted fast. It’s quite hard balancing the tones when the colour temperatures contrasts are so striking but I think I got away with it. I might tidy this up a bit or leave it as is and use it as a colour study for a studio piece. 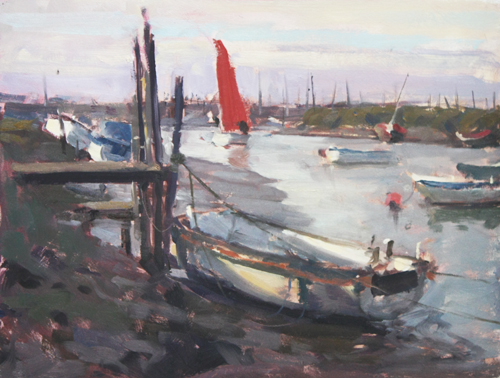 This was the only painting from day 3. It was a greyer day and the photo seems to have distorted the lights and darks a bit but hopefully it gives idea. The light kept popping in and out and I tried to catch the light on the foreground boat in an ‘out’ moment. I liked the vertical contrast of the wooden mooring posts and the red sail came up as a bonus about half way through the painting. Thank you whoever was sailing that vessel :o) I was actucally sat on a mooring platform like the one painted and had to be careful not to drop any brushes otherwise they would have dropped through the wooden planks into the thick mud below! 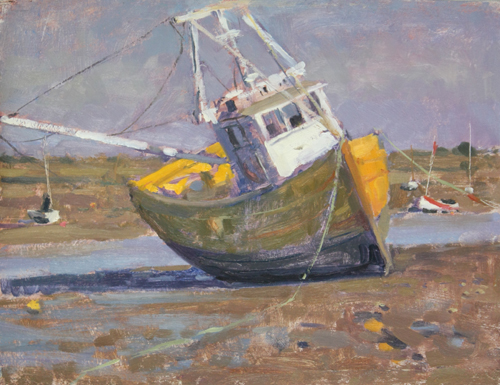 Beached vessel, Brancaster Staithes (11x14in)
I really enjoyed painting this one. An unsual composition just begging to be painted. As with the others, it was pretty cold so thermals were needed along with the trusty hat with built in ear muffs. Brancaster Staithes is a great place to paint, along with the nearby Burham Overy Staithes. I find it better painting boats out of the water as they don’t move so much. The ones in the water seem to constantly spin around in the tidal movements! 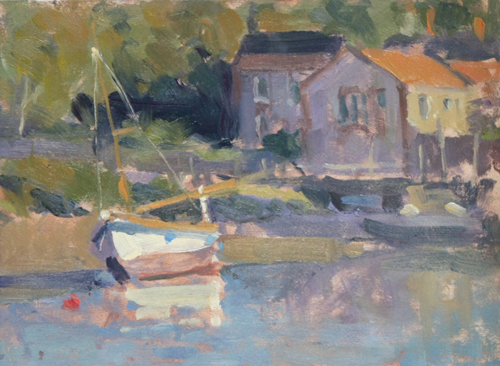 Autumn light, Blakeney (6x8in)
This was a little bonus study I was able to do on the last day of my break. It was trickier than I imagined as it was a small panel and the light/water were moving at a fast pace. Just enough time to get the essentials down. The building on the right was actually further away from the boat but I moved it closer to give a sort of L-shaped or triangular composition. The angles of the masts bring a nice set of dynamic lines to the piece. Not more than 45 mins on this one.
A great place to paint and hopefully I’ll be back there again sometime soon.
David2017-12-27T11:51:37+00:00