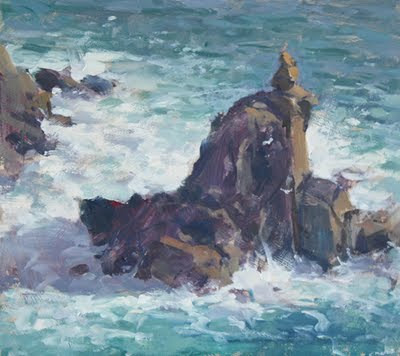 ‘The Irish Lady’, 8x10in, oil on board
This was painted whilst perched on some rocks facing towards Land’s End. The rock is known as the Irish Lady and is apparently haunted! It was really windy so I had to tidy up a few of the brushstrokes afterwards. I wanted to capture the sense of the foaming swell around the rocks and used a couple of trusty seagulls to comment on the scale. 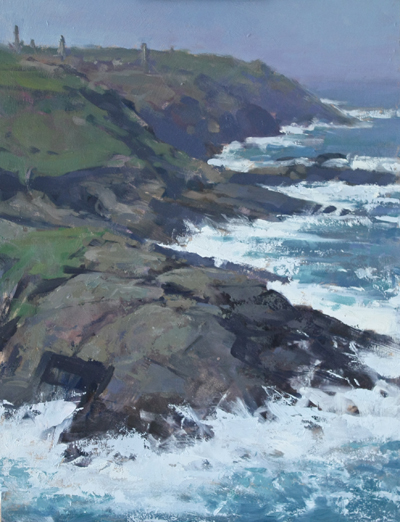 Quite possibly my favourite Cornish location. I love the heavy seas around Pendeen and the huge Enys that juts out from the cliff. It’s tricky trying to capture a sense of the sheer ruggedness of the place with an oil study on the spot but hopefully it conveys something of the place. These sorts of paintings can’t be overworked otherwise you end up with a muddy/chalky mashup. One hit, working fast in the blustery wind, sink or swim (not literally!)….giving it my best shot at the time. That’s all you can ask really, even if the end result doesn’t quite hit the heights of expectation.

I painted some acrylics up at Pendeen and will post them another time. I was pleased to have had a go at Pendeen in oils as I knew it wouldn’t be easy! For some reason, with certain subjects I feel more inclined to work in acrylics and Pendeen is one of them. 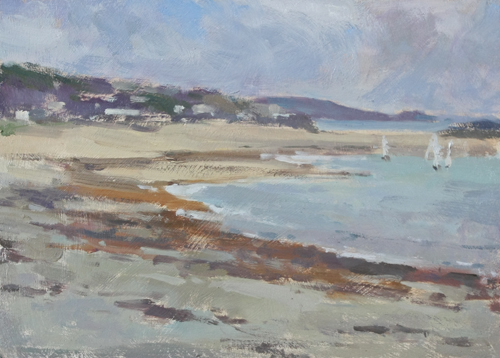 ‘Marazion beach, breeze and sunshine’, 8x10in, oil on board
Painted on the beach at Marazion, the sun kept flashing in and out which made things tricky. I had four others from the plein air crew painting their own versions of the scene alongside me which was great fun! No time for snacks Tim…..there’s some serious work to be done here :o) 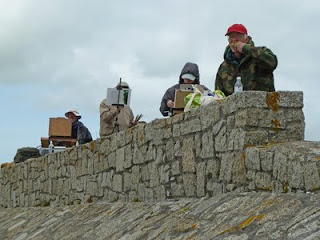 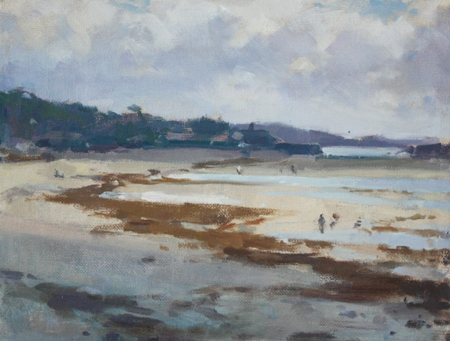 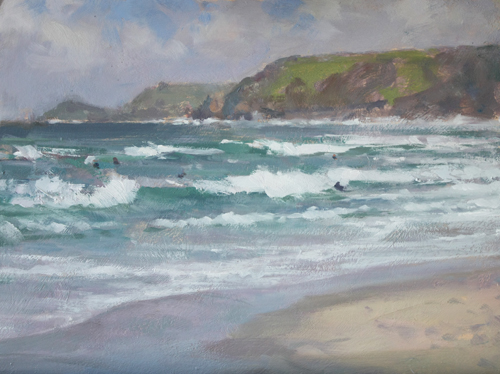 ‘Surfs up! Towards Aire point, Sennen’ – 13x10in, oil on board
It’s not easy painting waves. You have to tune in and try to distill what’s going on. There’s the colours, tones, rhythms, lines, edges, shadows, lights, reflected lights…..I could go on :o) Everything is moving and once again the light was in and out! Not that I’m complaining, it’s all part and parcel of the whole experience…..trying to give a sense of the moment. I must admit, I do enjoy that experience of zoning into the moment. 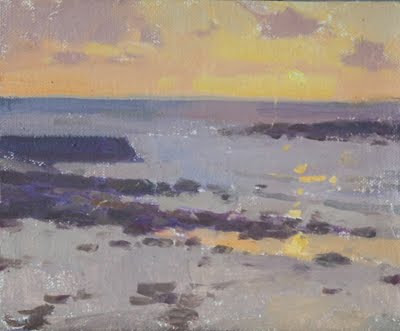 ‘Sennen jetty at sunset’ – 6x8in, oil on board
I painted this alongside Tim on his last day in Sennen. I wasn’t going to do a painting as I was feeling tired but who could resist a sunset like that! I whipped out a little 6×8 and rapidly tried to take things down as the light faded. Every time we looked up the sky and water were changing! This kind of speedy work could be likened to taking notes I guess….my excuse for producing something that could arguably be classed as unfinished or a little rough round the edges!

‘Fast fade, Sennen jetty at sun down’ –  4x10in, oil on board
Painted alongside Roy on our last evening in Sennen. The speed at which we had to paint was like nothing I’ve encountered. We’re talking a handful of minutes to get this down! 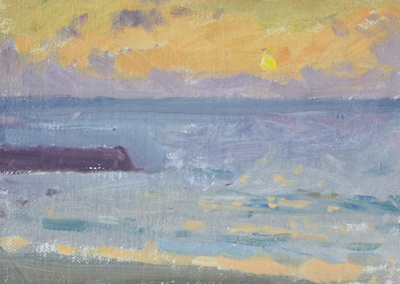 ‘Sunset moment, Sennen jetty’ – 6x8in, oil on board
Ditto for this little sunset too. Barely 10 mins of painting really but I was eager to get something down having just painted a ‘wipe down’ on the cliff at Land’s End. 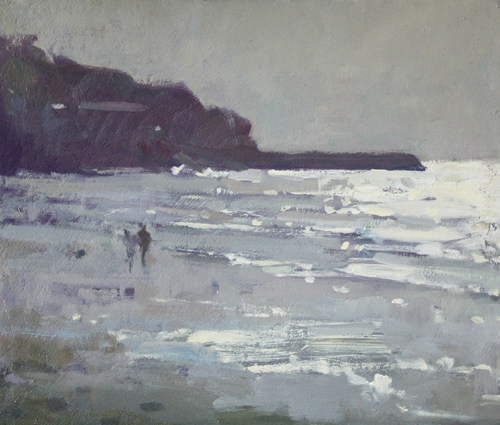 This was the first painting of the trip and I painted it alongside Mike in the late afternoon sun. As it was pretty much a contre jour subject the colours were very subdued and it was all about the tonal contrasts. That said, I had to be careful with the colour temperatures (which don’t come out very well in the photo).