A thoroughly enjoyable and productive painting trip to Sennen in Cornwall. We were lucky to have pretty decent weather and all the wild flowers were out which provided plenty of painting options. The wind was a bit tricky to contend with on the clifftops but we all found ways to cope with it. I found that sitting on the ground helped, using the pochade like a laptop in front of me. Most of the paintings were done in oils but I couldn’t resist the temptation to do one or two acrylics on the cliffs. 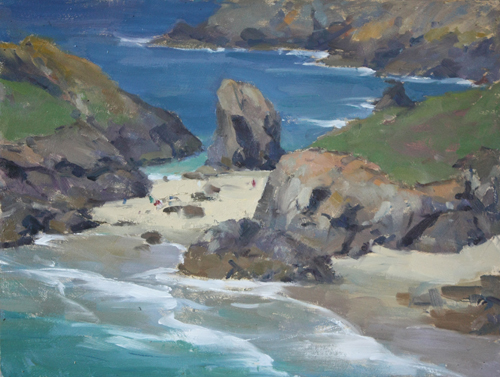 ‘Kynance Cove’ – 13x10in, oil on board
I loved painting this one and was pleased with the outcome. I was a bit unsure as to whether it would be too busy but it seemed to hold up OK. I painted it perched on the cliff above Kynance Cove. When I first arrived it was cloudy but the skies cleared revealing the amazing colours in the water. The tide was out too which meant the sand banks were visible. Perfect! On the left (with the yellow crest) is ‘Gull Rock’ which attracts lots of seagulls. 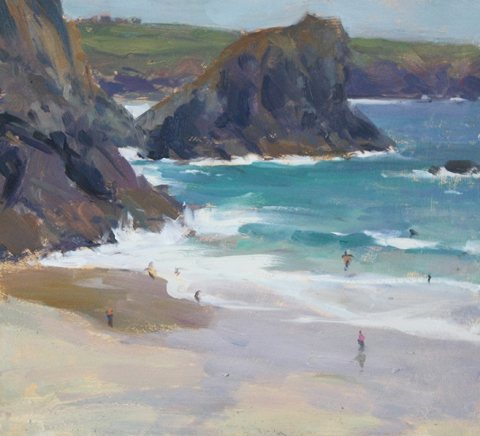 ‘The Bishop’, Kynance Cove ‘- 10x8in, oil on board
Another nice one to paint at Kynance Cove. Since ‘The Bishop’ points to the right it seems to balance up the composition. The surfers flirt with danger with the nearby rocks but they appeared to be enjoying themselves. Just to the left from where I was sitting was a cafe which has to have one of the best cafe views in the world! They serve a nice pasty too which went down well with a well earned cup of tea :o) I got a little sunburnt whilst painting this, making the mistake of rolling up my sleeves after applying the sun cream!
The colours in the water are stunning to look at and it’s hard to avoid the temptation to exaggerate them. One thing I noticed whilst down there was the amount of crimson/purple in the water, often more so towards the horizon. I used plenty of mixes with viridian, permanent alizarin crimson and cobalt blue as the starting points. It’s interesting how the sky affects the colours in the water and the way the waves create certain tones with their cast shadows and highlights. I could watch those waves for hours…..sure beats reality TV :o) 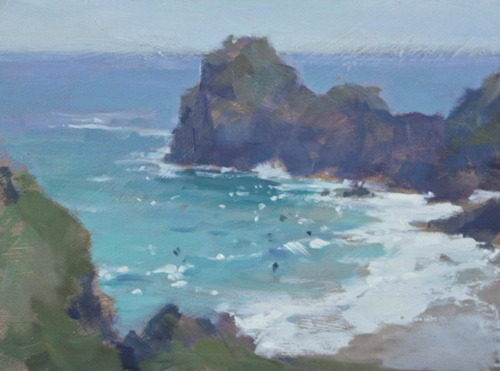 ‘Westwards from Kynance Cove’ – 6x8in, oil on board
I’d pretty much had it after painting the two previous pictures but heading back up the steep path I spotted Mike Richardson painting from this spot. Revived after a quick chat and an oaty snack bar I felt it would silly not to try to get something down. It was painted very quickly and I didn’t wanted to make those rocks too dark, even though the light was almost behind them. Otherwise, they would have a ‘drab’ feeling which was the last thing I wanted. Just goes to show if you sense the moment needs to be captured then it’s worth a go, even if weariness is starting to set in. 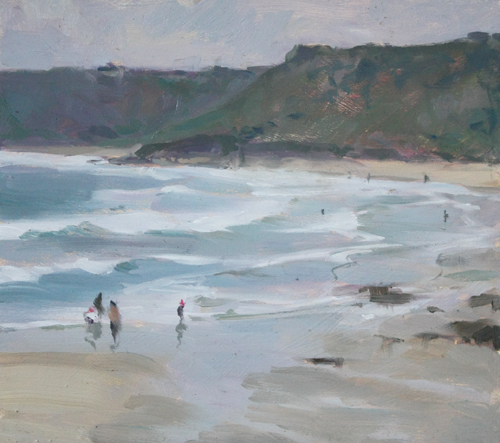 ‘Taking the plunge, Whitesands Bay’ 10x8in, oil on board
This was painted on one of those days where the sun kept popping in and out. In an ideal world, I’d have 2 panels side by side and paint on one when the sun was out and the other when it was in. However, sometimes it’s more straightforward to crack on with the same piece and rely on the moments when the conditions are steady together with a bit of memory work. It certainly sharpens the senses! A nice family who I chatted to afterwards decided to take a dip in the sea in the perfect spot and the two children had pink hats which provided a handy little note of colour. I wanted to keep things loose, clean and fresh without working the paint too heavily. 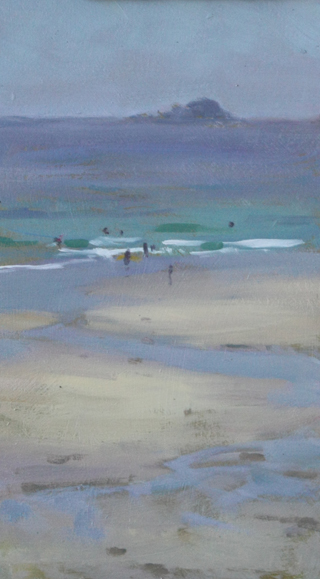 ‘Towards The Brisons, surfers at Sennen’, 4x8in, oil on board
I painted this whilst perched on my bonnet in the car park on Sennen seafront. I couldn’t resist the colours. Amazingly, the sun was properly out but there were still blues, mauves and greens to be seen everywhere! I bumped into Carole Baker whilst painting this too. She is a talented artist from the West Midlands and had just sketched her way round the bay that morning from Cape Cornwall (a good 5 miles or so!).
My aim was to try to get as close as I could to the essence of the landscape. I wanted to try and capture a sense of ‘being there’ so I was careful not to get lured in by detail and general fussiness. It’s quite absorbing and intense working in this way as it’s important to try and tune in and get to the heart of the subject. It’s a one hit scenario where things can go right….or wrong! I like that tension though, it keeps me on my toes and makes it all the more satisfying when a painting works out. There seem to be a host of factors that influence the outcome of a plein air painting – the weather, changing light, things moving, tide getting too close to the easel etc! It’s important to be focused and embrace the whole experience. After all, for me anyway, plein air painting is as much about the experience of being out there painting in the great outdoors as it is the end results. Even better when you can enjoy it all with a cracking of fellow plein air enthusiasts :o) More paintings to follow.
David2011-05-30T09:06:00+01:00May 30th, 2011|0 Comments