One or two more

One or two more

It’s been rather hectic lately but I have been trying to keep the momentum going whenever possible. This is a little rework of a previous plein air study I did of Blakeney harbour. I wasn’t sold on the original compostion and feel this is a stronger design. I wanted to retain the sense of immediacy in the paint handling as if it had been done on location. It was painted alla prima in the studio one evening after work. 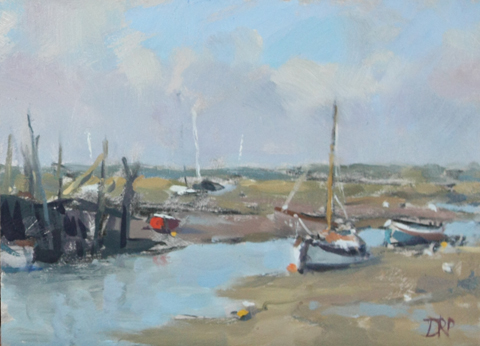 ‘Boats at Blakeney’, 6×8, oil on board
I got up for this one before dawn and literally had about 15 mins to paint it before the sun burst fully over the horizon. Even with a 6×8 it seemed to be asking a lot but worth a shot. I thought the result was OK and have decided to work up a bigger version (14x18in) and ironing out some of the creases along the way (I feel the subtle balance of colours needs adjusting slightly). It’s still only half painted so I’ll leave the bigger piece for another post. The cows made a nice point of interest but I walked to the distant fields afterwards and got chased by a huge beast down the hill! He shoved his head into my rucksack a couple of times and luckily the slippery slope of the hillside deterred him from chasing me any further. Clearly an unwilling model! 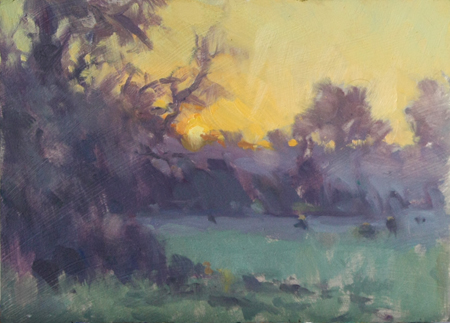 Sunrise from Olney, 6×8, oil on board
I also managed to get a study of George Street done in Bath. It was all a bit of a blur as I’d had a long drive, it was pretty hot and really busy. Still, I thought I’d have a go and here’s the result. By the time I’d finished the light had totally moved round an the distant buildings were in full sunlight. 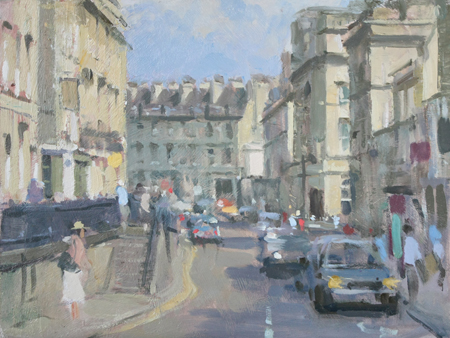